GRABONG (staff, quarterstaff) is traditional armed combat with body length objects such as quarterstaves, spears or broomsticks as improvised weapons.

Southeast Asian wanderers and monks have always used simple bamboo sticks to transport provisions and luggage. According to the legend of Zaiyuh, it was the monk Tang Gam Jang who, when he brought the Buddhist teachings to China, passed through the Nanjauw region populated by the Thai, using a magic long staff.

But it is more likely that resourceful Pahuyuth Free-Warriors have used such staffs much earlier for protection against waylayers and wild animals.

A typical free warrior GRABONG is an even, about body length long staff made of heavy wood. Ancient war staffs were additionally covered with braided steel wire or riveted with metal plates to withstand sword blows.

The special feature of the GRABONG are the complex turning techniques, which distinguish this unique discipline from most staff fighting methods and make it possible to use it in narrow or obstructed environments. It is said that a good GRABONG-Warrior can move his long staff so skilfully that it looks as supple as a rope.

A typical Free-Warrior GRABONG is an even, body-long long staff made of heavy hardwood. Antique war staffs were additionally covered with braided steel wire or riveted with metal plates to better withstand sword blows.

Common and relatively widespread were simple staffs (Plong), fishing spears (Hog), and spears and glefs captured on battlefields (Twoun, Twoun Song Nahh, Ngauw and Ngamm). Also muzzle loading rifles could be used like staffs in an emergency, if there was no time to reload. 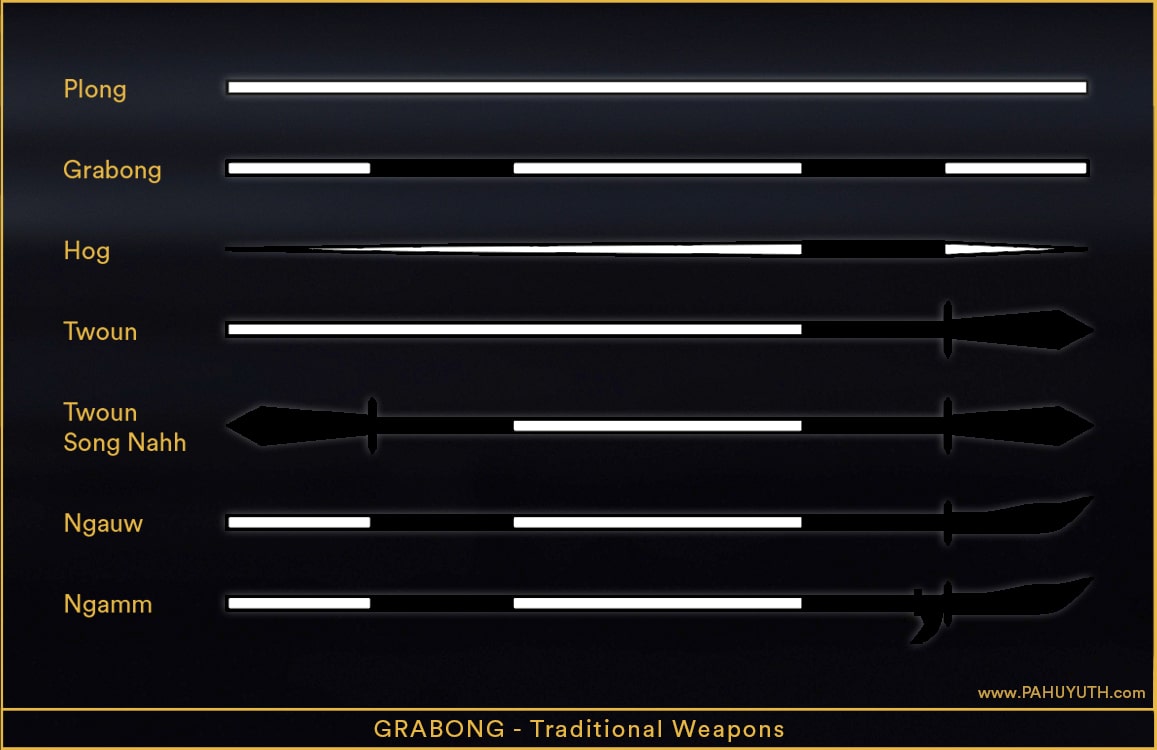 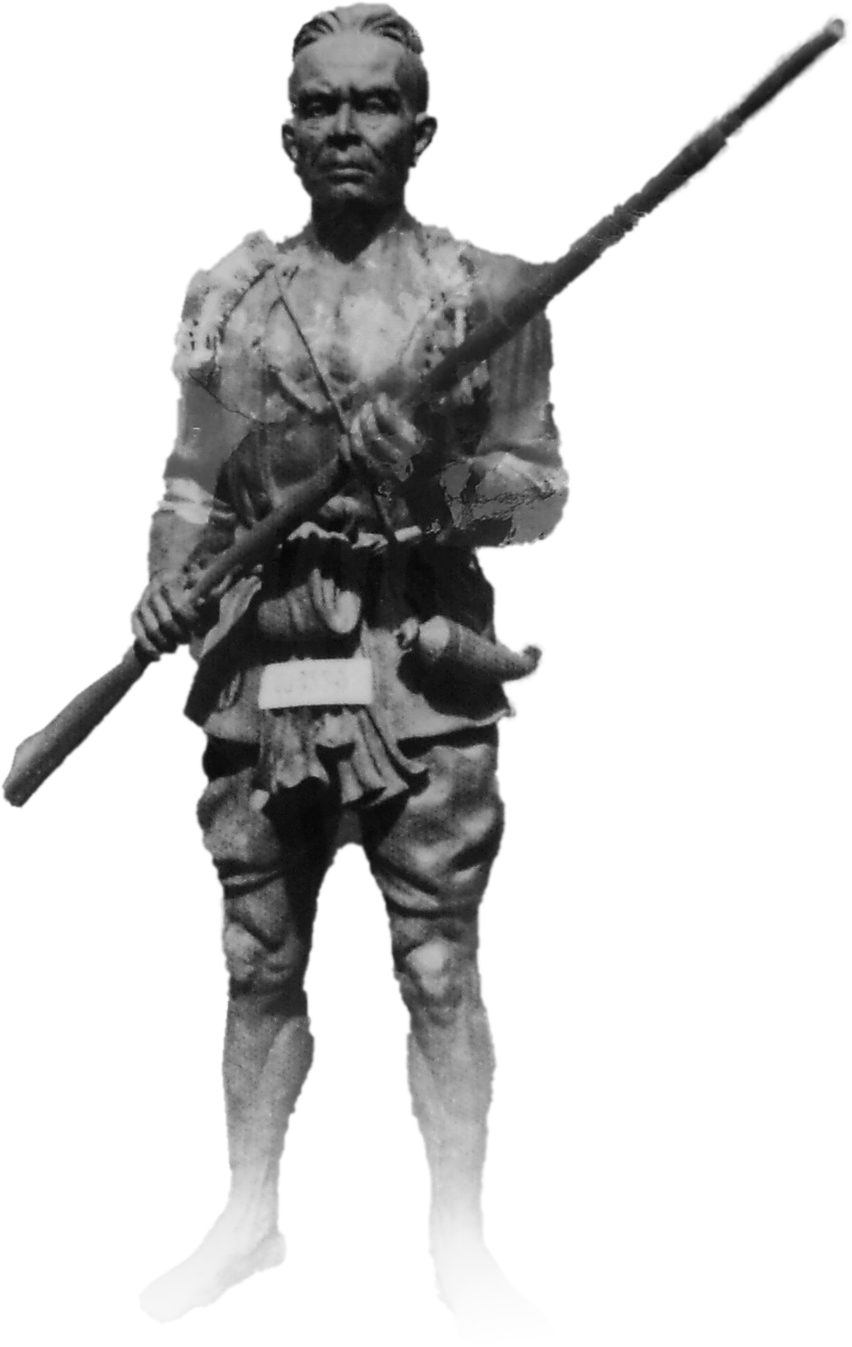 A Free-Warrior from Bang Racharn. Front loader rifles could be used like staves in an emergency if there was no time to reload. 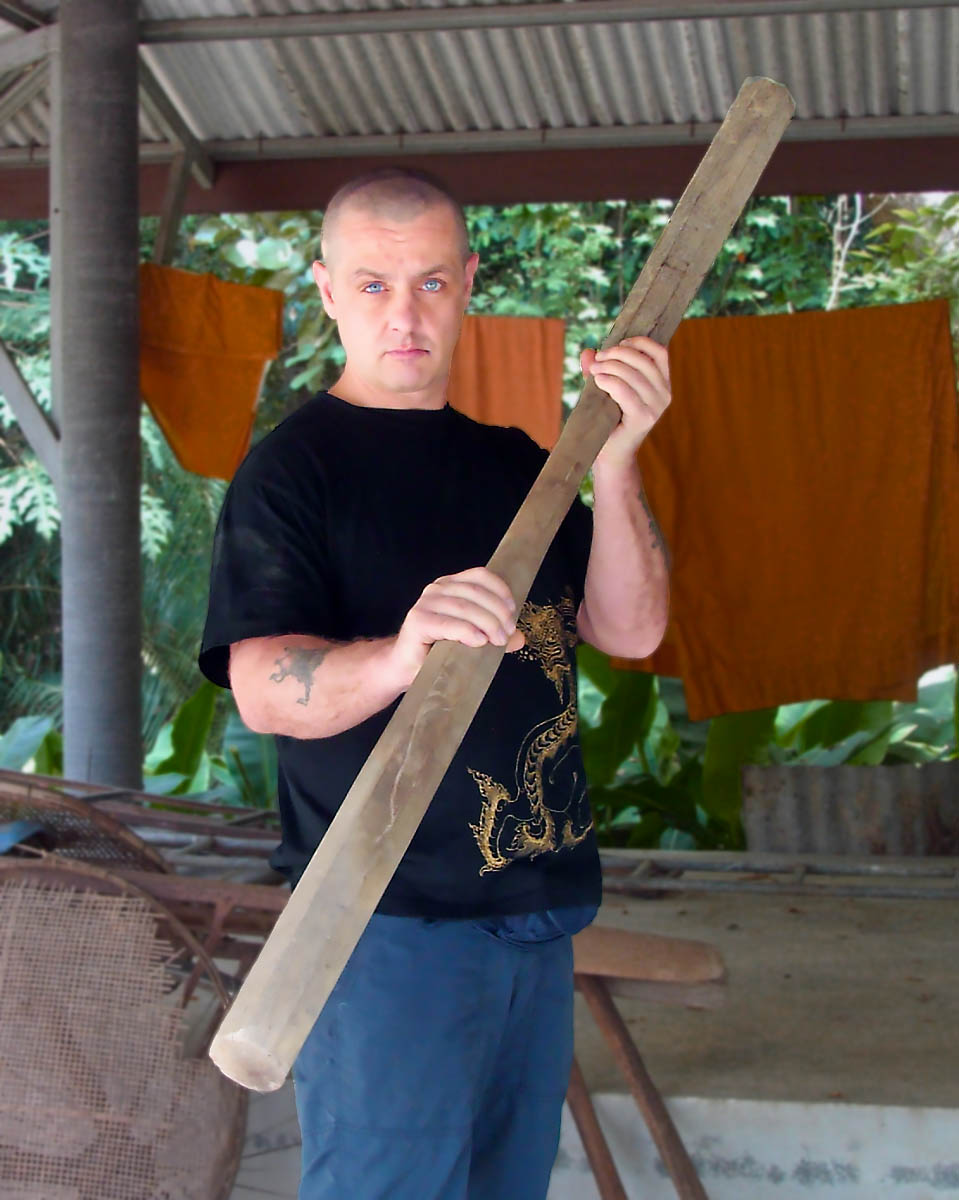 A heavy pestle for rice (Saak Dam Kauw) from Bang Rachan. An experienced GRABONG-Warrior knows how to deal with long staffs and body length objects of all kinds. 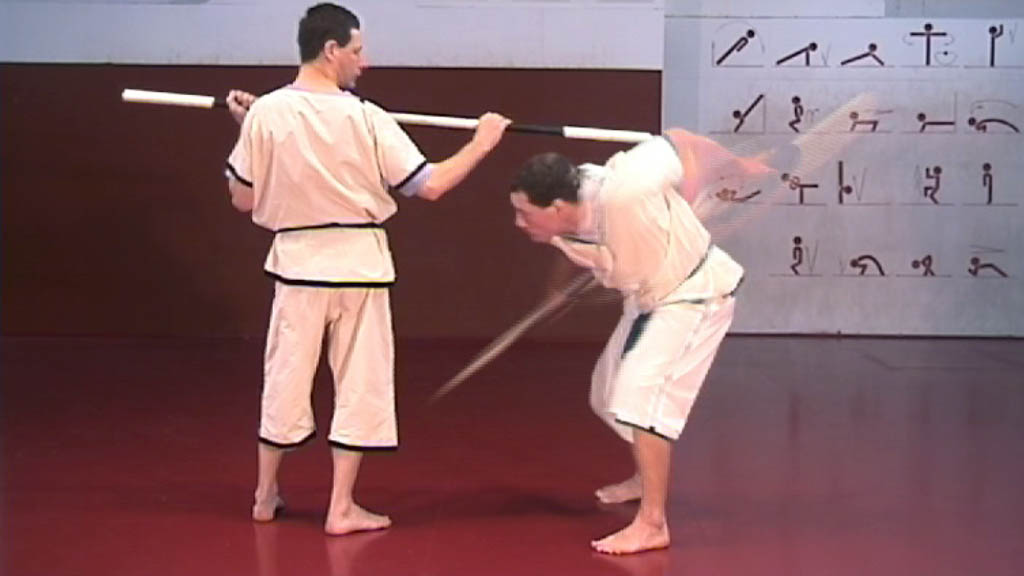 A snake knows no obstacles – it is said that a good GRABONG-Warrior can move his staff so skilfully that it looks as supple as a rope. 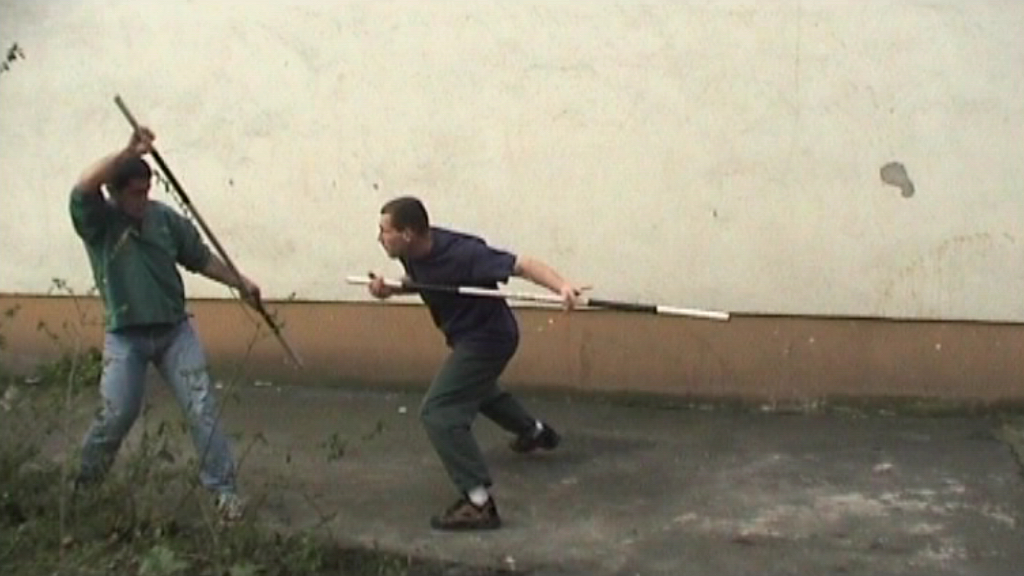 The ability to lead a long staff to and from any body position is elementary for any form of staff fighting. The handling and turning techniques of the GRABONG enable safe and flexible guiding of the staff, whether standing or on the ground. 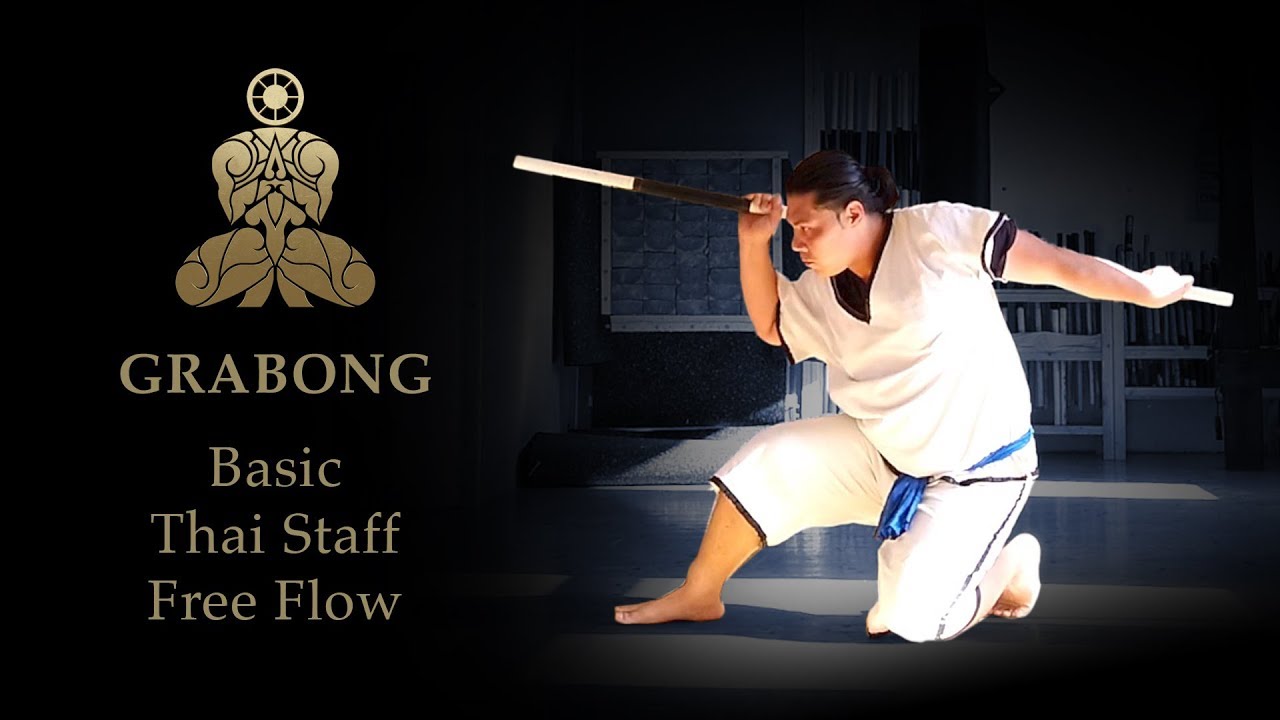 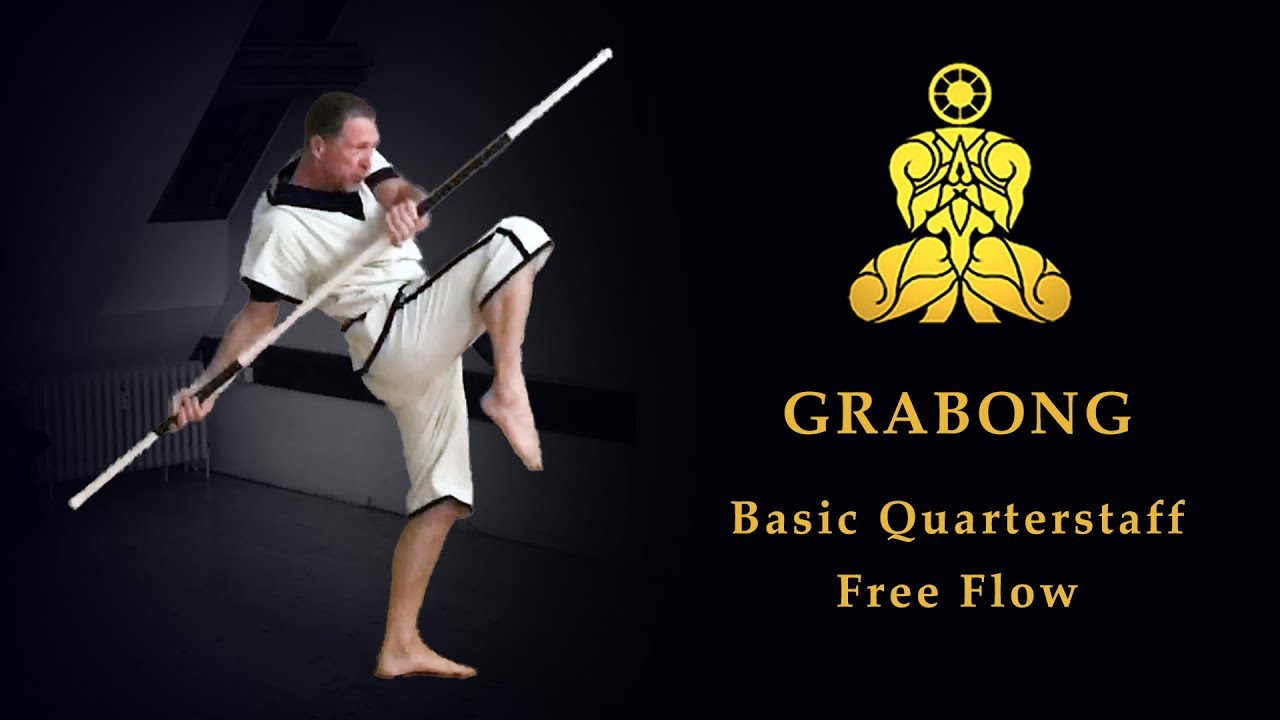 The fighting style of Grabong

Quarterstaff fighting in the sense of GRABONG requires a pure harmony of movement between body and long staff, which must not hinder each other during the fight. This requires different handling and turning techniques from and to each body position. They clearly differ from artistically influenced staff turning techniques (juggling, spinning, fire stick, etc.).

It is said that the art of expertly guiding a GRABONG is to move a bulky object such as a long stick so skilfully that it appears soft as a rope and thus effortlessly overcomes the opponent’s defense. A snake knows no obstacles. A GRABONG can be used one-handed and two-handed. The entire length of the staff is used for attack and defense.

Although the GRABONG is a relatively long weapon with a correspondingly high range, it is rarely used in this way. Unlike other stick fighting styles, GRABONG does not necessarily require a free space. GRABONG was expressly designed for use in confined and obstructed environments (e.g. in the jungle or on the battlefield).

The fighting distance of the bodily weapons (fist, foot, elbow and knee) is extended by the staff. Conversely, the unarmed fighting methods contained in the GRABONG (especially the kick techniques) represent a shortening or addition to the staff fighting techniques. Similar to DAAB, the GRABONG uses the center of rotation of the weapon to divert the force of an enemy attack into a counter technique.

An experienced GRABONG-Warrior knows how to deal with long staffs and body length objects of all kinds. He incorporates both bodily weapons and ground fighting into his fighting style. Through his handling techniques he switches between different hand positions and distances. On contact he manipulates the opponent’s weapon in his favor.

Multidisciplinary trained GRABONG warriors can wield their staves alternately like a long staff (full staff length), a (Thai) sword (half staff length) or a knife (one sixth staff length). He also uses knowledge from LING LOM to apply leverage techniques or to disturb the opponent‘s balance to gain an advantage. 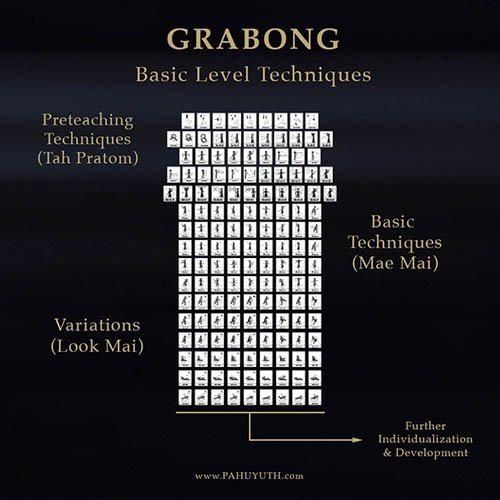 The Pahuyuth Compendium contains the 142 school techniques of GRABONG.

After the execution of King Tak Sin in 1782 AD, the ancient Pahuyuth Free-Warriors retreated from the public. They went underground and took the knowledge about Thai staff fighting (GRABONG) with them.

Decades later, during the reign of King Rama II (1809-1826 A.D.), members of the royal family developed a stage fencing for noble people, which was to serve as “game, sport and entertainment”. The so-called Krabi Krabong.

Because the Krabi Krabong, unlike the GRABONG, has never been used in war, but is falsely declared as an ancient martial art, we always use the spelling with “G” at the beginning.

Detailed information about Krabi Krabong and its history can be found in our blog article. 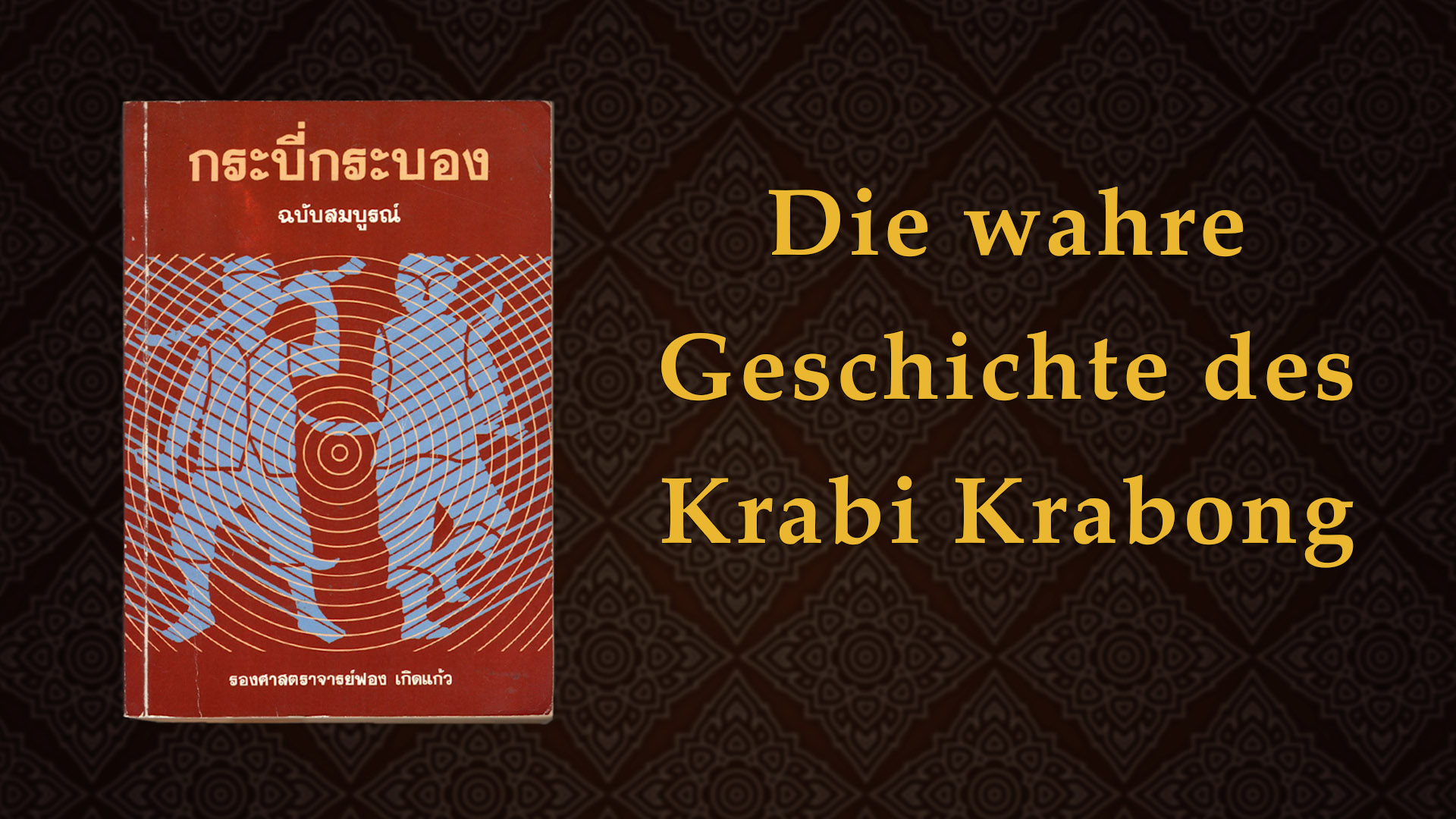 Build your own training staves

Learning a weapon fighting style naturally requires the integration of foreign objects into the movement patterns of the own body. The production of training weapons is a first step towards establishing a personal relationship with your own weapon and the respective weapon type. All training weapons, with the exception of scarves, are always produced in pairs.

In this video you will learn how to build safe and functional training staves for Grabong. 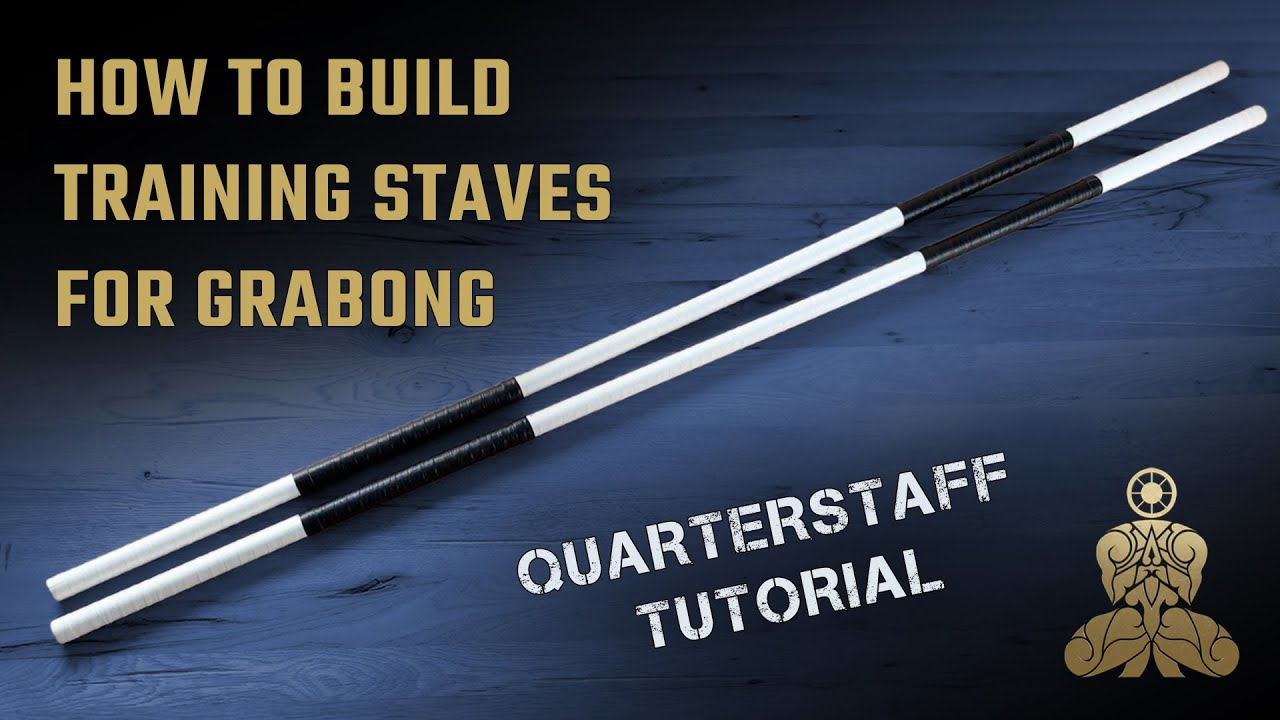 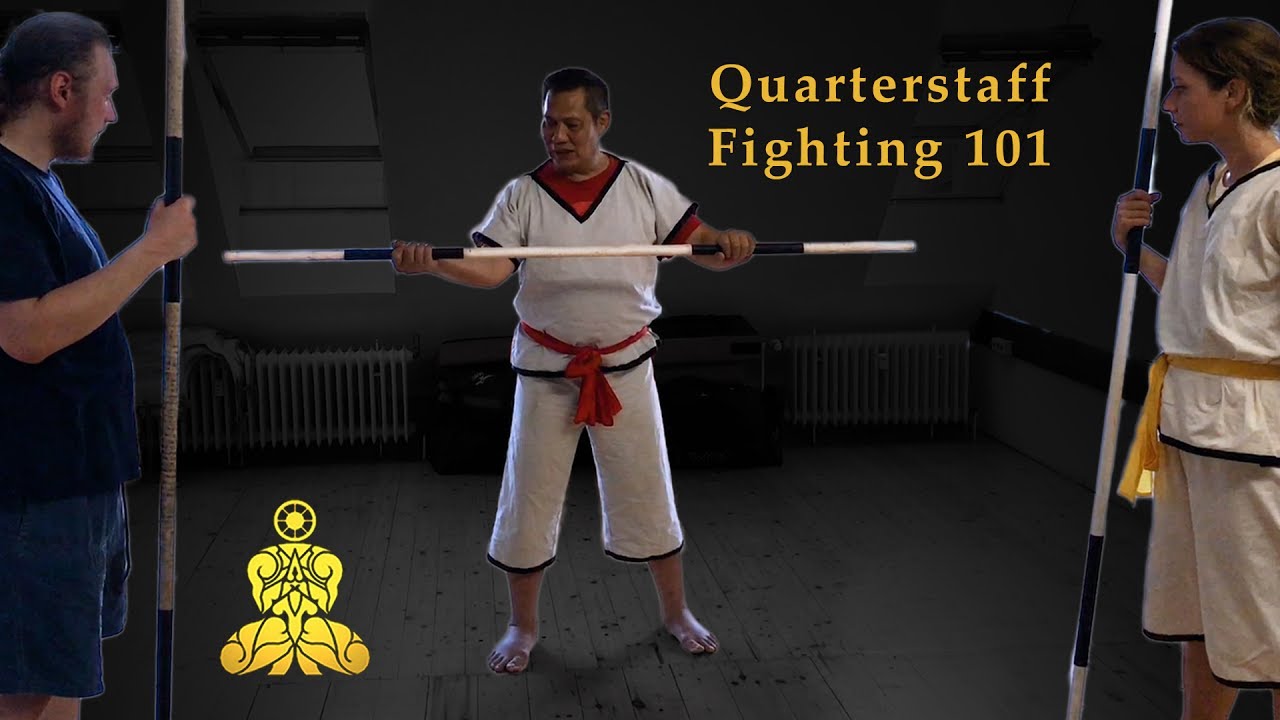 In this video from the Pahuyuth beginner’s course a teacher introduces the students to the grabong (long staff) and shows the differences between show and fight handling. 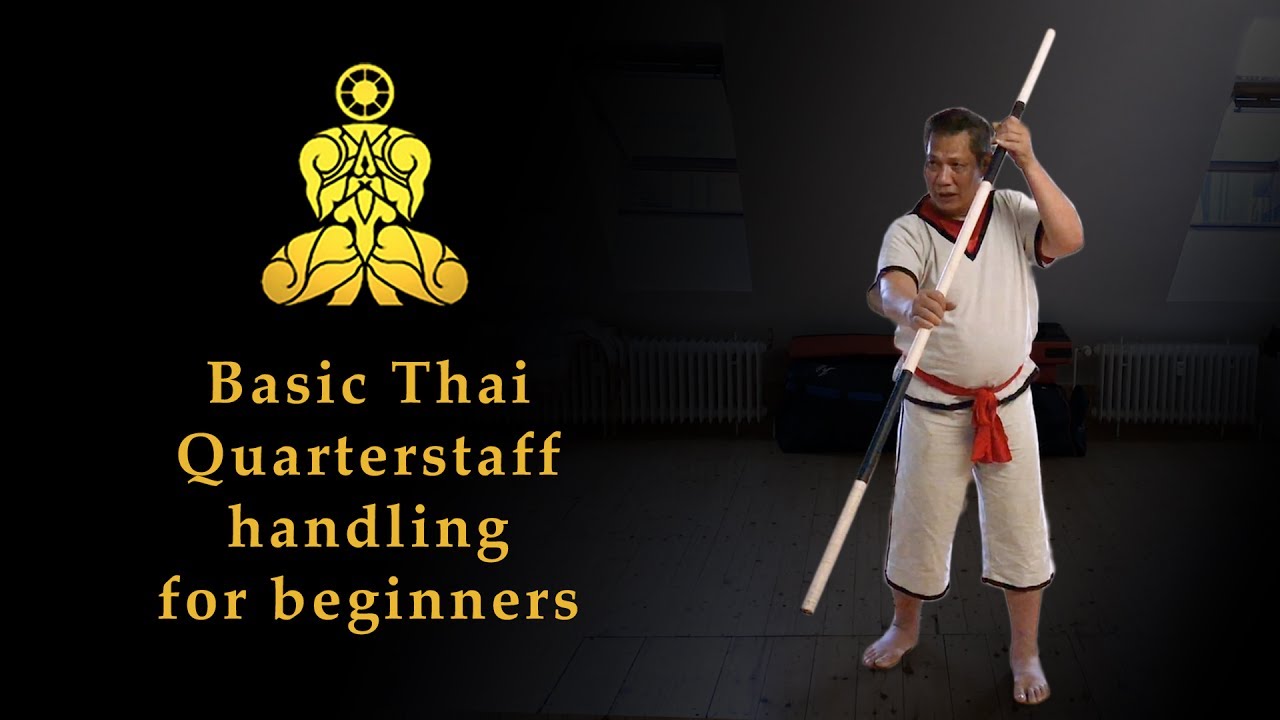 In this video from the Pahuyuth beginner course a teacher shows first exercises and techniques for quarterstaff handling. A grabong is rotated with one or two hands around the entire body. 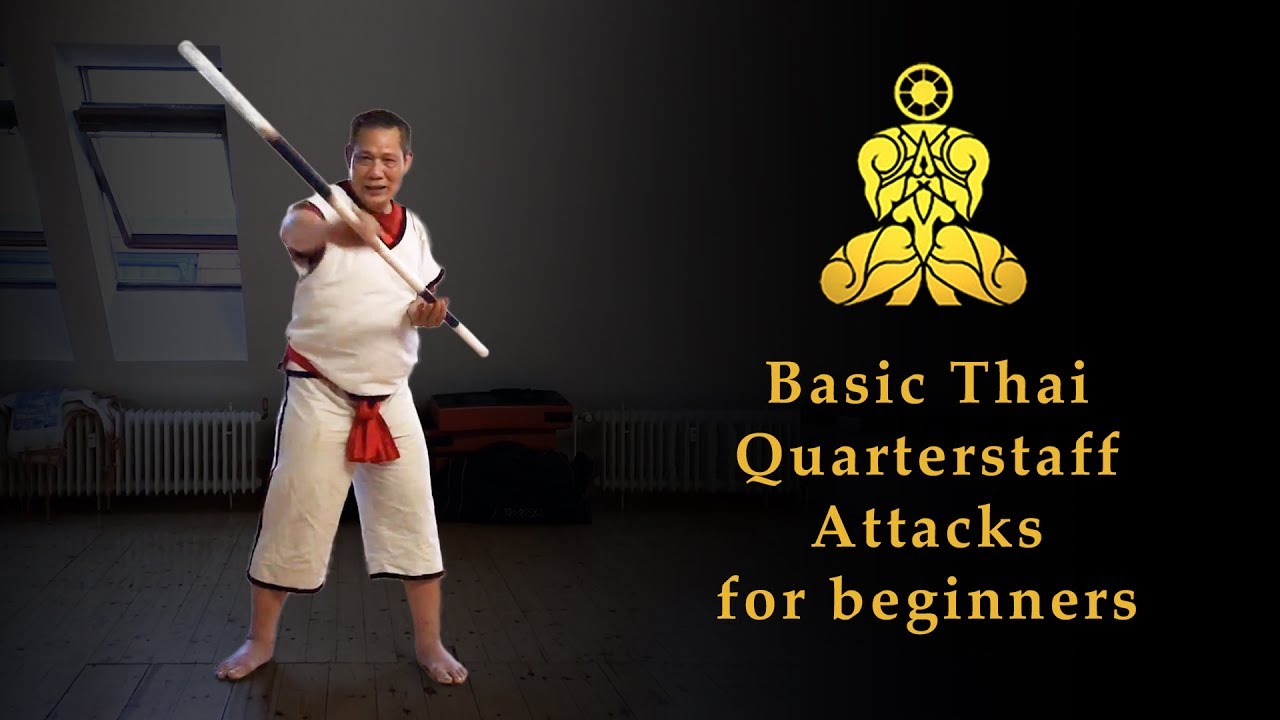 In this video from the Pahuyuth beginner’s course a teacher shows striking and stabbing techniques with the long staff for beginners. 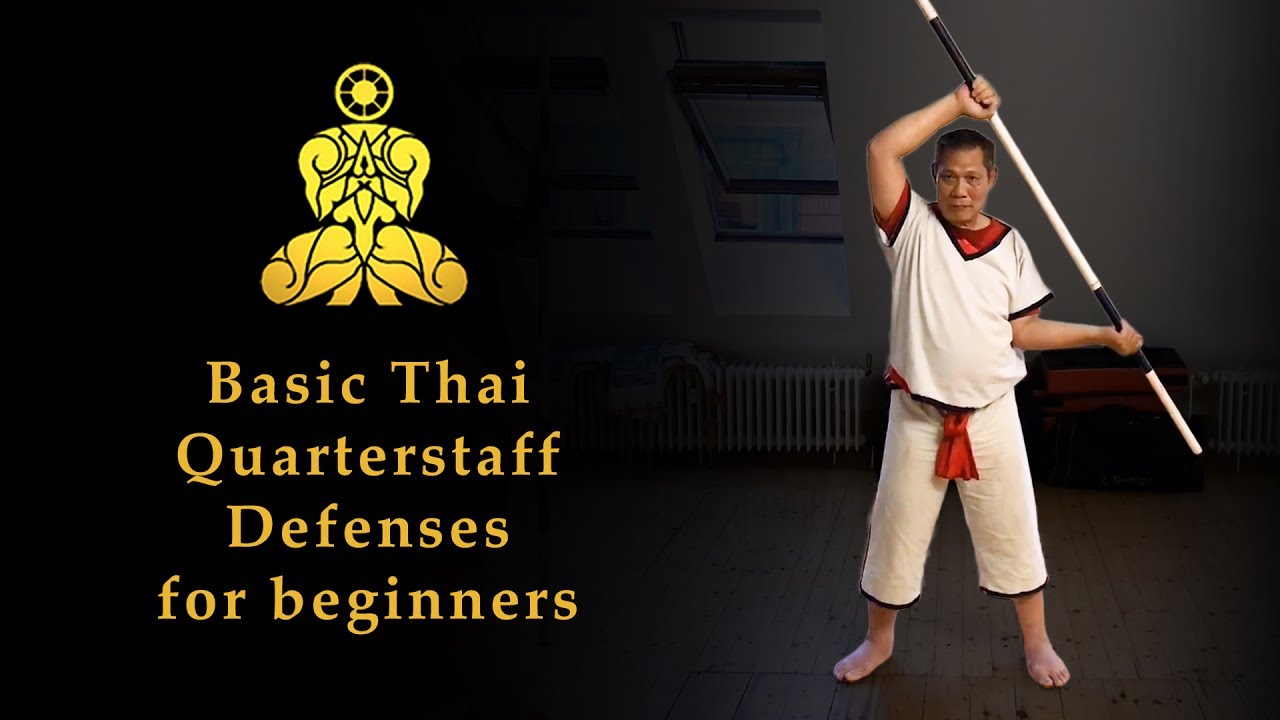 In this video from the Pahuyuth beginner course a teacher shows staff fighting defense techniques for beginners.

GRABONG in the context of Pahuyuth 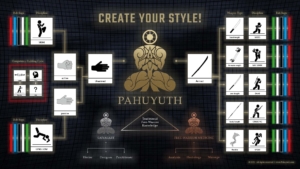 Long poles and staves have always been used in civil life (e.g. as walking staffs). Next to swords they were one of the most widespread weapons.

MEED warriors are always at a disadvantage with their knives compared to staffs, because they have a much longer range. A study of GRABONG provides them with valuable knowledge about how to overcome these disadvantages.

The same applies to MAI SAWK warriors, as they are naturally dependent on bridging fighting distances quickly and safely. Practitioners of DAAB are already familiar with the use of turning techniques and winding in combat. Therefore they can usually learn the twists and turns of GRABONG very quickly.

SABAI warriors in turn benefit from a better understanding of the possibilities and limitations of this weapon. 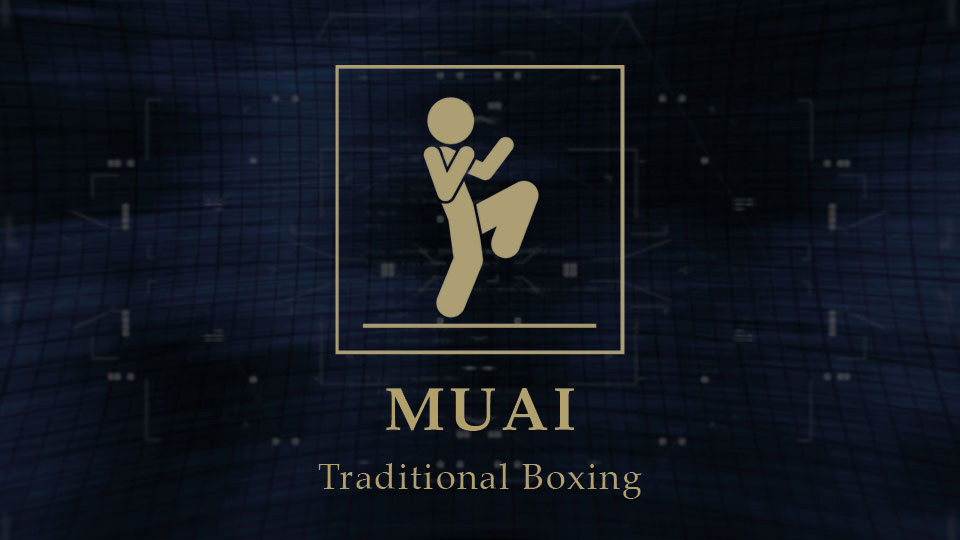 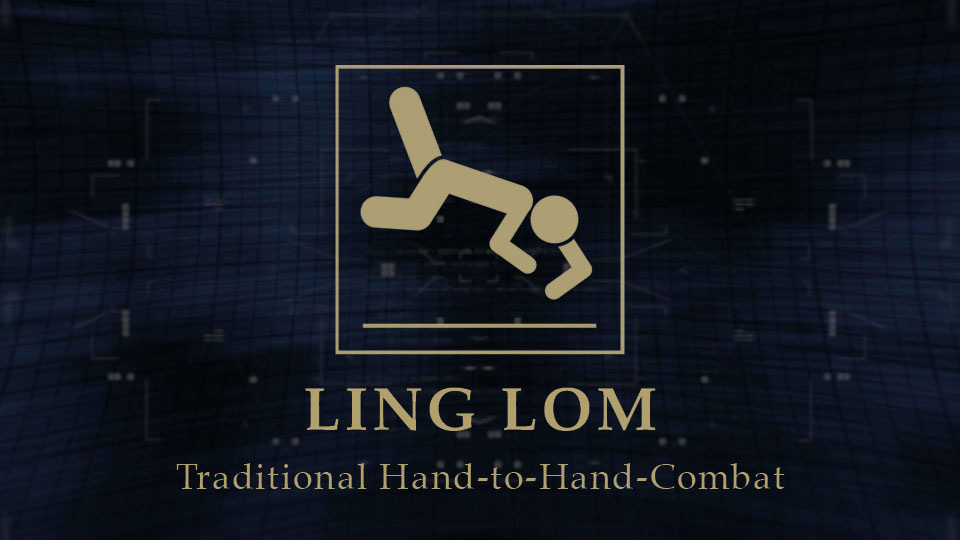 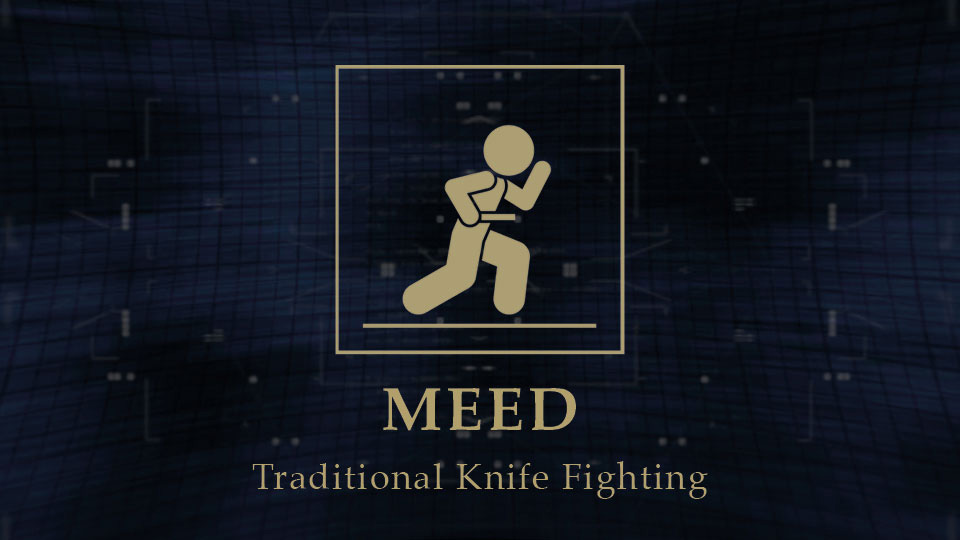 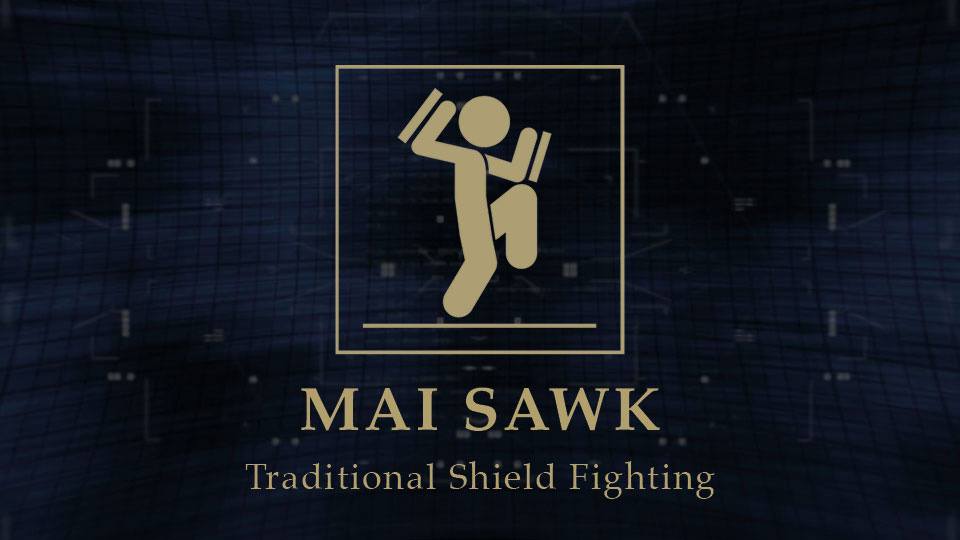 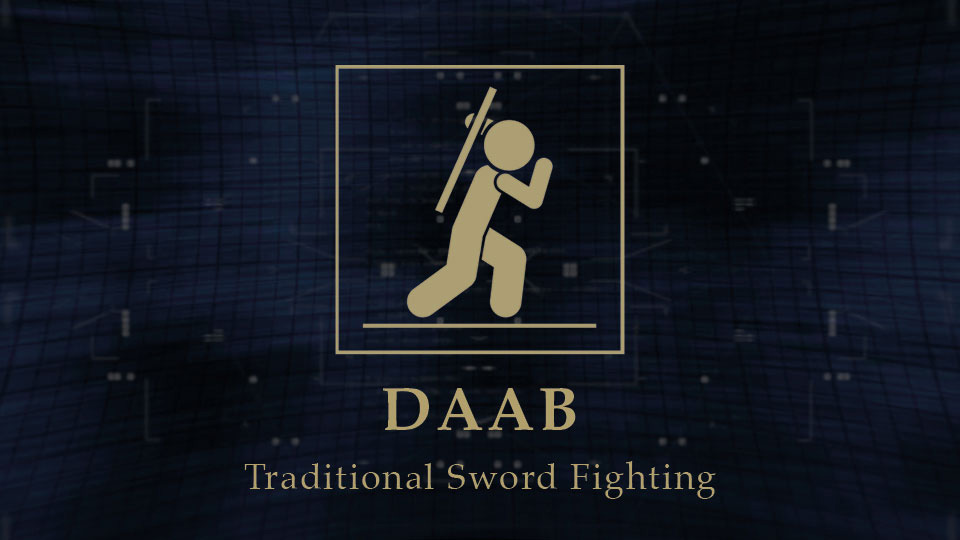 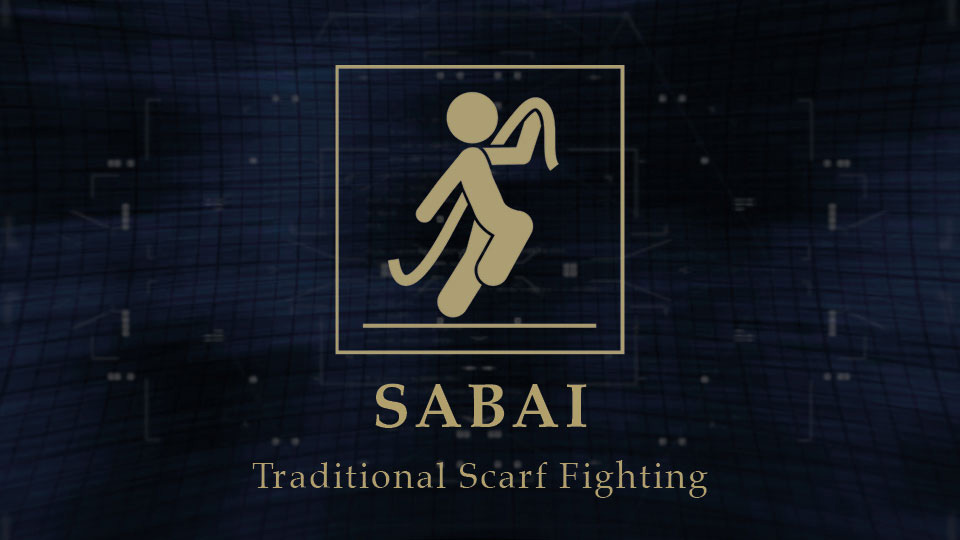 Here we collect questions and answers about GRABONG, staff fighting, Krabi Krabong, Southeast Asian fighting staves and more. If you have a specific question that has not yet been answered here, please send us an e-mail to [email protected].

Is a long staff better than a sword?

Not in our experience. The long staff has a higher range and has two ends with which you can attack. However, a sword (in our case the DAAB) is easier to accelerate and has a blade for cutting. The better chances of victory therefore have the one who masters the handling of his weapon better.

You are an absolute beginner and want to learn to defend yourself with body-long objects?

You want to learn GRABONG, but don’t know where to start yet?

We offer you various analog and digital ways to start immediately, lay the foundation for your staff fighting training and qualify as a full-fledged Pahuyuth Free-Warrior .