DAAB (sword) is traditional armed combat with arm-length objects as improvised weapons and Thai swords, which can be used as single or double swords.

The Thai sword (DAAB) originally comes from a simple rice trucheon (Gab) or a weed scythe (Gab Gleeh). These tools were used as improvised weapons against Chinese invaders more than 4000 years ago and were developed into fighting swords over time.

Typical for this type of sword fighting is the use of the rather centrally located center of gravity, which allows a high rotation speed and complex movement patterns, as well as the use of the grip end with which blunt strikes can be executed. Authentic Thai sword art is always trained with heavy training weapons made of wood or steel, but never with light rattan or bamboo.

The Pahuyuth School in Berlin is the only school in the world where the infamous DAAB NARESUAN (also known as “Sword of Ayutthaya”) is taught. A special one-handed sword style developed and secretly passed on by a paramilitary special unit under the reign of King Naresuan (1590-1605 A.D.)

Thai swords (DAAB) are worldwide unique and not related to any other sword type. They belong to the arm-long, one-hand and one side sharpened blank weapons and are divided into three equal-length sections.

The first is the so-called sword face (weakness), which measures about one third of the blade length from the tip of the blade. It is mainly used for attack. The lower blade area (strength) is called the sword catch and is used for defense. While the sharp side of the blade is used for chopping, cutting or tearing, the blunt back of the sword can be used to defend against attacks and to shatter bones. Some swords have an engraved writing or symbols on the blade, which are said to have a magical effect.

Due to the low purity and quality of Southeast Asian steel, these swords have always been prone to relatively heavy wear. Aggressive clashing of the blades is therefore avoided. A Thai sword is not a hammer – therefore the power of the opponent’s attack is preferably used to reposition one’s own blade and to gain power for counter attacks. In times of war, sword blades were occasionally pulled through decomposing corpses or excrement to increase the blade’s effectiveness through the cadaveric poison and bacterial infections.

Between the blade and the hilt there is sometimes a very small guard. A hand protection is not provided for Free-Warrior swords (Daab), because it would impair the guiding of the sword. Unlike other sword fighting styles, between a DAAB swordsman and the blade of his opponent lies solely the fighting ability and skill of the one who wields the sword.

The sword hilt covers another third of the sword and serves for balance. Traditionally Thai swords have a round handle, which allows a secure hold and a smooth change of the grip (blade up or down).

The end of the hilt (pommel) is sometimes reinforced with a solid steel knob. Stabbing with the point of the sword (Ort) are rather unusual because of the curvature of most swords and the often wide bladed tip. Instead, it is preferable to stab or strike with the end of the handle. It is said that in the course of time more people have died by the pommel than by the blade of such a sword.

The sword hull (scabbard) is usually made of hardwood and can be used for defense and attack due to its high stability. The original form of fighting with the double sword is performed with the scabbard in one hand and the sword in the other. The rope attached to the scabbard is mainly used for transport purposes and to secure the sword hull. In the case of teacher’s swords, the transverse bands or stripes can be an indication of the years of teachership already completed.

Thai swords are not top-heavy but balanced. They are held close to the balance point of the sword. This allows a high rotation speed and enables complex movement patterns by changing direction. The thumb, the base of the index finger and the forefinger act as the axis of rotation, while the opening and closing of the hand creates the rotary swing. Sword strokes can thus be produced not only from the arm or body rotation, but also from the hand or wrist.

An experienced DAAB-Warrior knows how to handle both one and two swords (or a sword hull). Fighting with only one sword is generally preferred and is considered the highest form of sword fighting. He also masters the fight with arm-length objects (e.g. baseball clubs, batons and cudgels) and the fight against one or more opponents with the same or different armament.

A DAAB-Warrior integrates bodily weapons (fist, foot, elbow and knee) as well as ground fighting and grip techniques into his fighting style. He has a considerable repertoire of pommel attacks and handling techniques. This enables him to manipulate the opponent’s weapon (Winden im Band) and to operate with deadly precision in very close environments (e.g. in the jungle or on the battlefield). 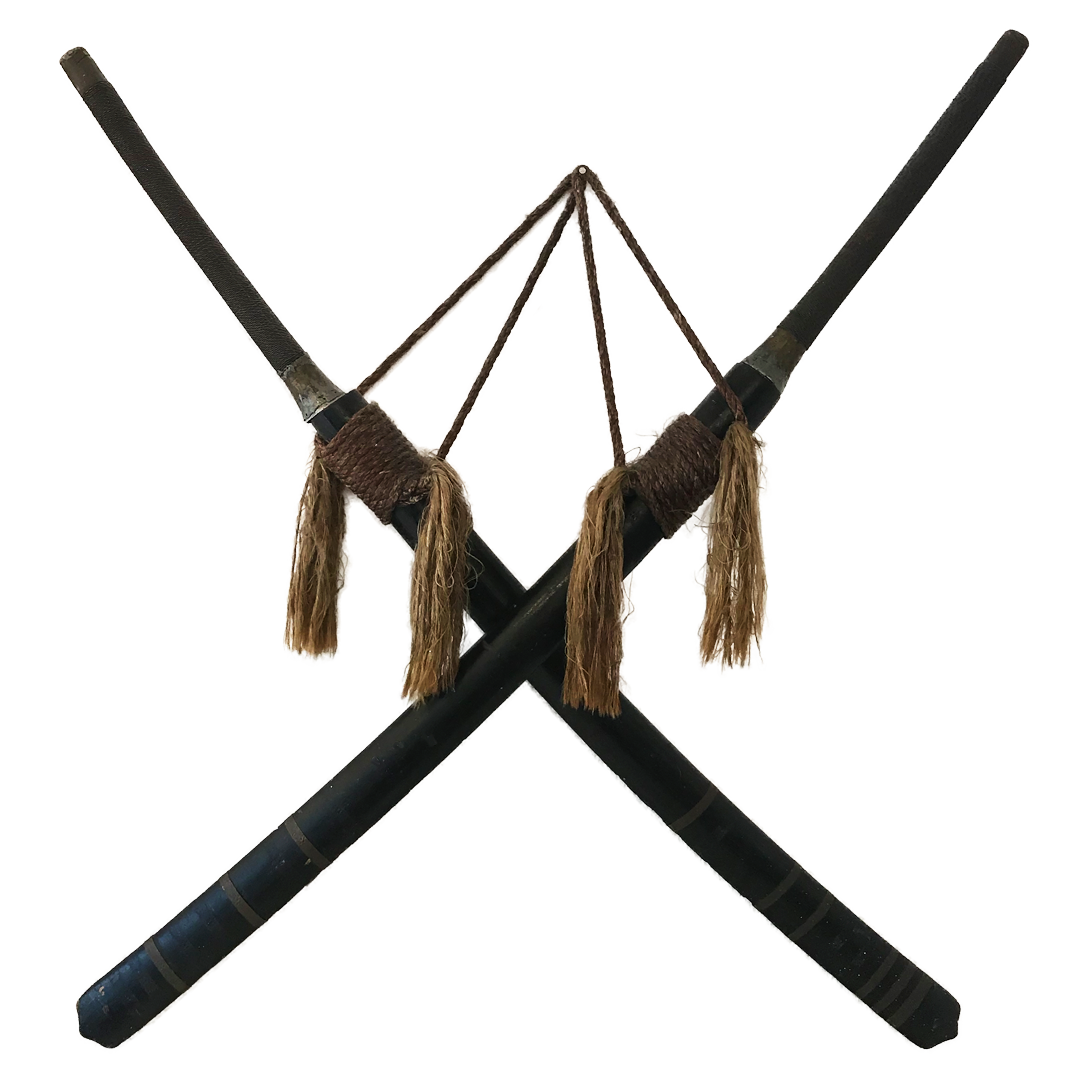 Whoever is capable to learn the ways of the traditional sword (DAAB) becomes a worthy guardian of the ancient sword culture and a descendant of all those who fought for peace and freedom. The Free-Warrior sword (DAAB) originally derived from a rice trucheon (Gab) or a weed scythe (Gab Gleeh). As improvised weapons, these tools were already used against invaders several thousand years ago and in the course of time were developed into unique fighting swords. 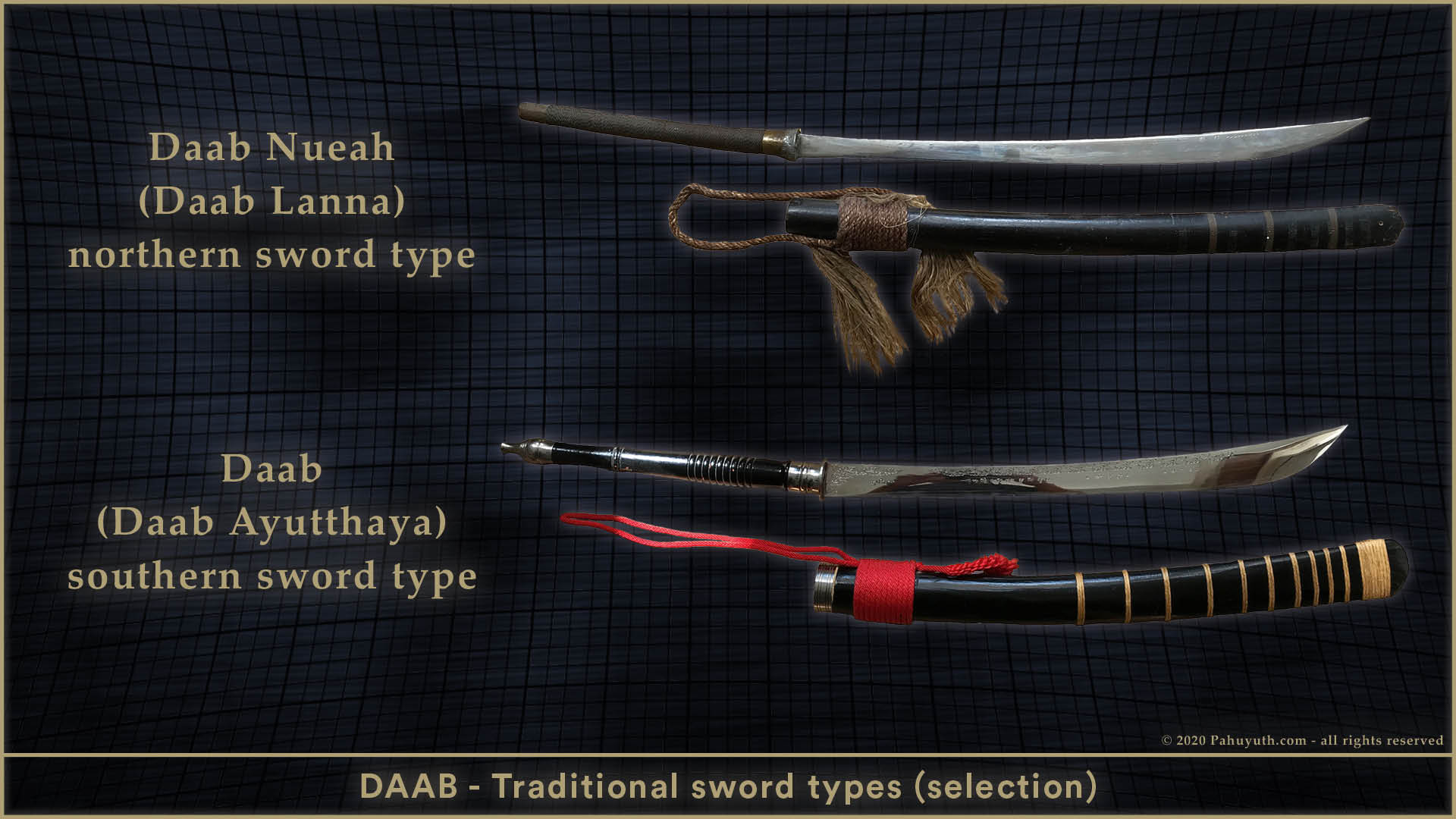 The two most common types of war swords are the Daab Nueah (Daab Lanna), which is native to the north of present-day Thailand, and the Daab Ayutthaya, which is from the south. 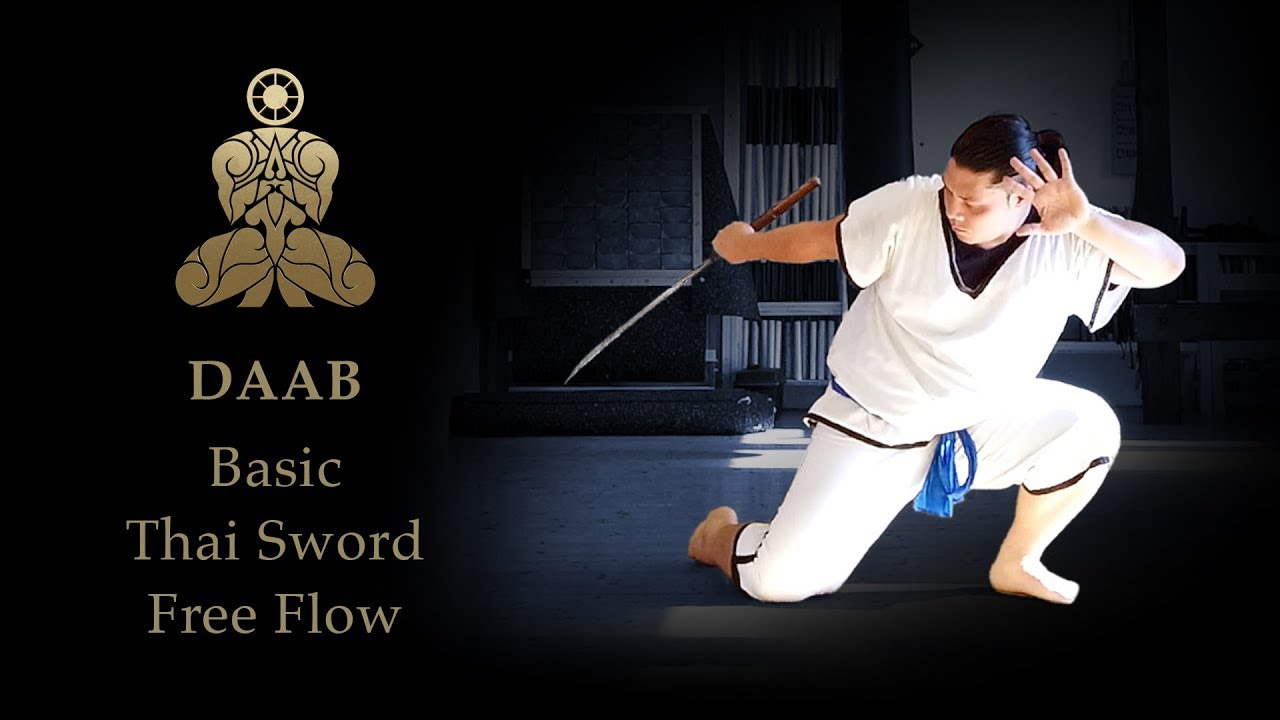 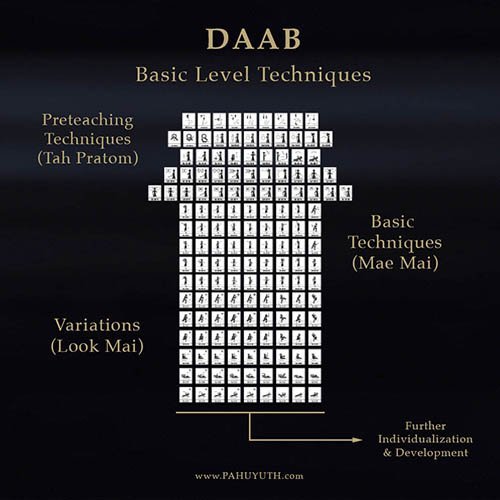 The Pahuyuth Compendium contains the 152 school techniques of DAAB.

The Pahuyuth Compendium is the new technical handbook for the basic level.

After the execution of King Tak Sin in 1782 AD, the ancient Pahuyuth Free-Warriors retreated from the public. They went underground and took the knowledge about Thai sword fighting (DAAB) with them.

The Krabi Krabong has never been used in war, let alone was it designed for it. Nevertheless, in many places it is falsely declared as an ancient combat martial art. For this reason, DAAB (war sword) as it is taught in the Pahuyuth School in Berlin can be called the “original Krabi Krabong”.

Detailed information about Krabi Krabong and its history can be found in our blog article. DAAB NARESUAN – The sword of Ayutthaya

After his coronation in 1590 A.D. King Naresuan restructured the armed forces of his empire.

On his orders, a group of paramilitary Free-Warriors (Pahuyuth) was asked to protect the country in the event of an invasion and to conduct covert operations.

This resulted in a new sword style (DAAB), which was secretly passed on among the descendants of this sword fighting art – the so-called DAAB NARESUAN, also known as the “Sword of Ayutthaya”.

As the indirect founder of this style, King Naresuan has since then been regarded as sword fighting teacher honoris causa and is worshipped by the members of DAAB NARESUAN to this day. 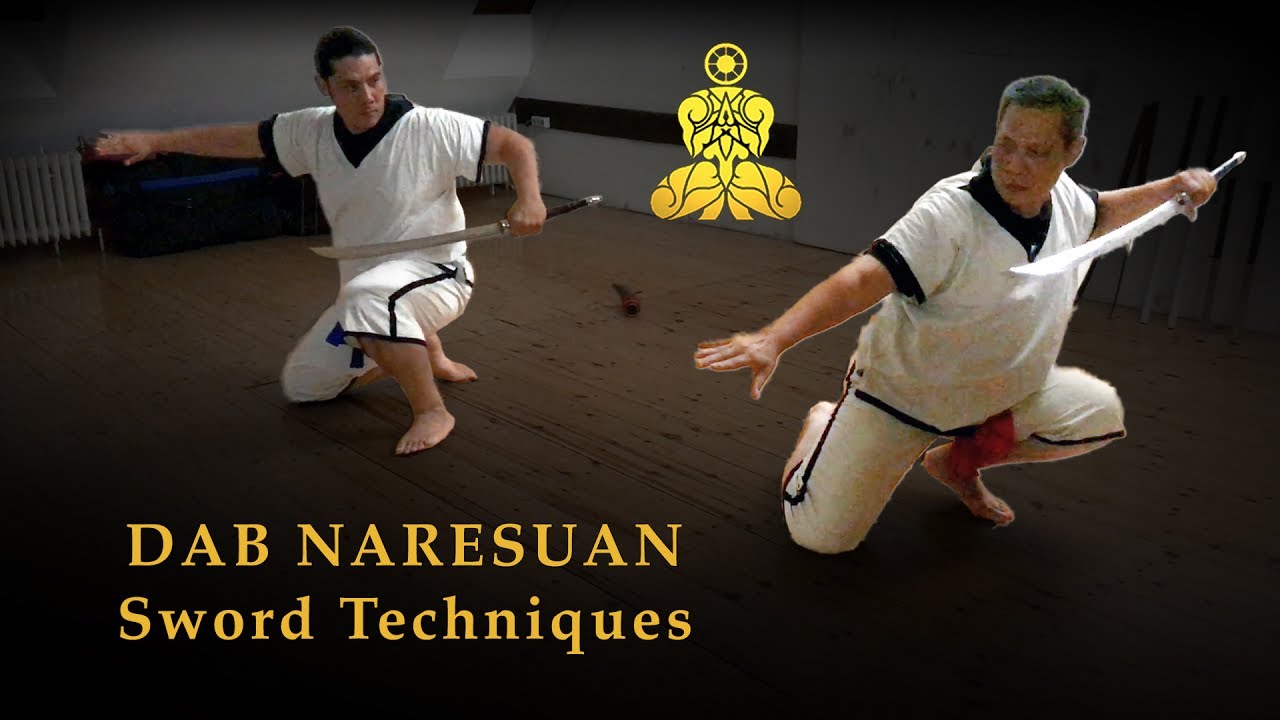 The day the fishtails began to twitch

April 8, 2007 (AD): For the first time since the early 1950s students and teachers of different Thai fighting styles met in the Royal Park to talk freely about their styles and exchange experiences.

A long time ago it happened that pickled fish on Ayutthaya’s old market place suddenly started to twitch. This was considered an omen that would prophesy the beginning of a Burmese invasion and summoned hundreds of Thai warriors from all over Thailand to defend their country.

In keeping with this well-known historical event, the motto of this year’s meeting was: “The day the fish began to twitch”. 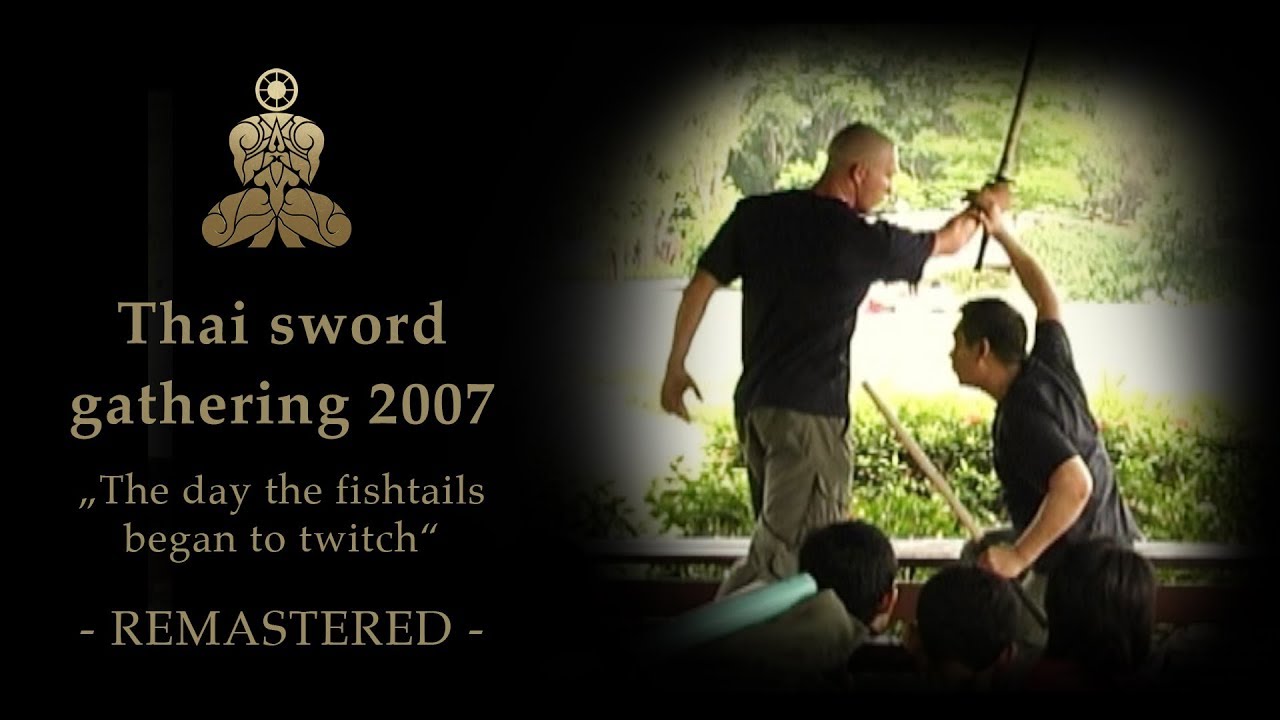 In the year of the Lord 2017 we were invited by our friends from the Brotherhood of the Ascanians to participate in the medieval castle festival at Ziesar Castle.

The mutual deep respect and curiosity for each other’s sword style leads to an interesting exchange of knowledge. We have recorded parts of this memorable encounter of warriors and blades from different cultures and share them in the following video.

More about the Brotherhood of the Ascanians: To the website 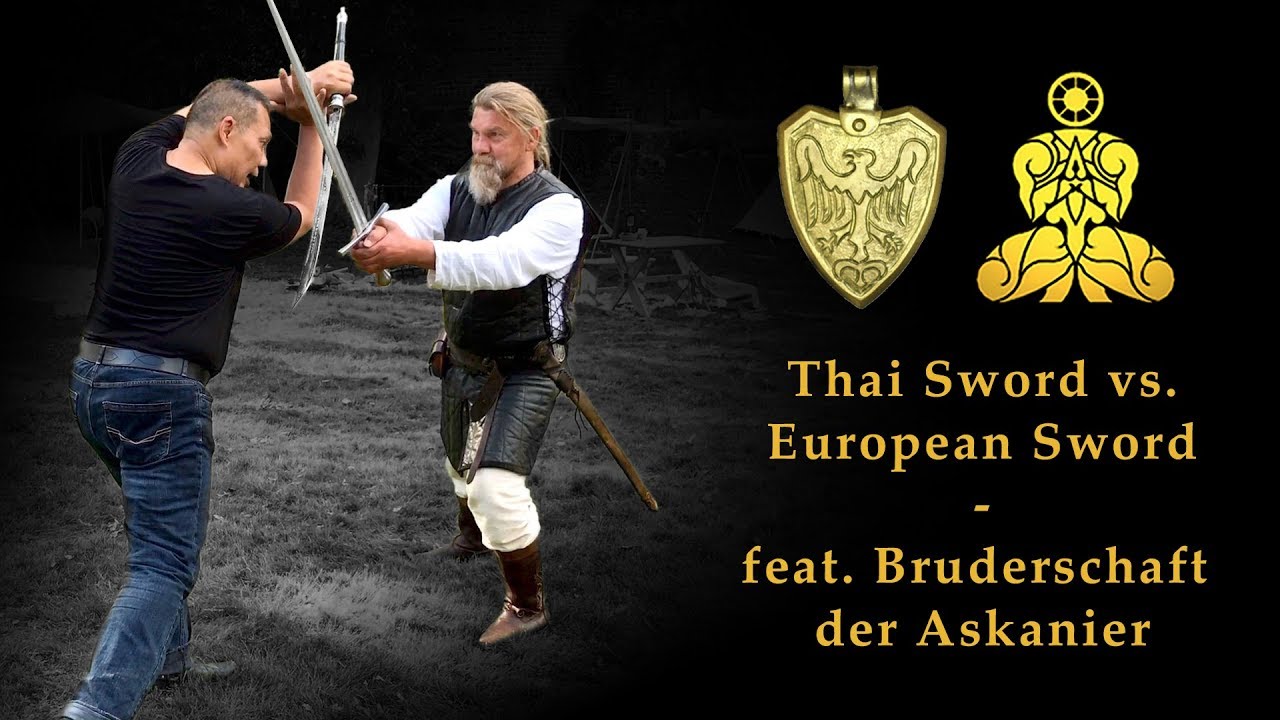 The dance with the sword belongs to the traditional cultural heritage of the swordsmen and is taught to DAAB practitioners of the higher learning levels upon request. Necessary prerequisites are knowledge of DAAB and Saiyasart. Three examples of such sword dances can be found in the following videos. 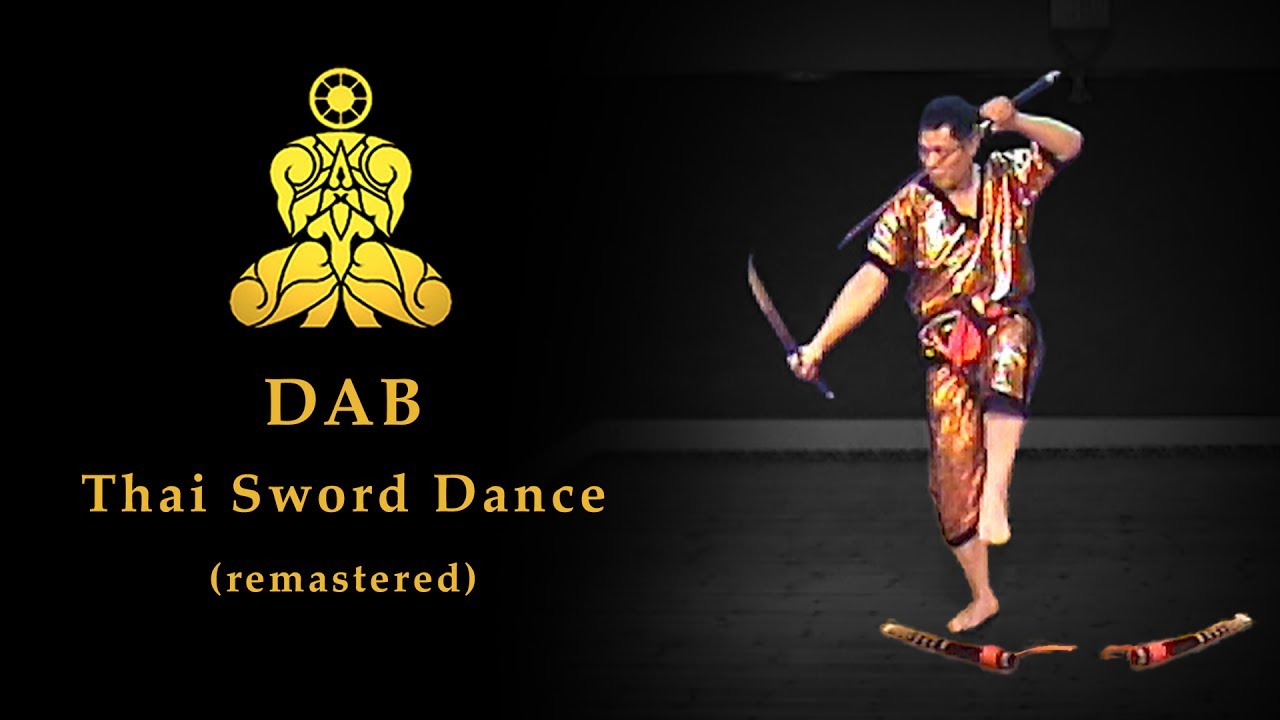 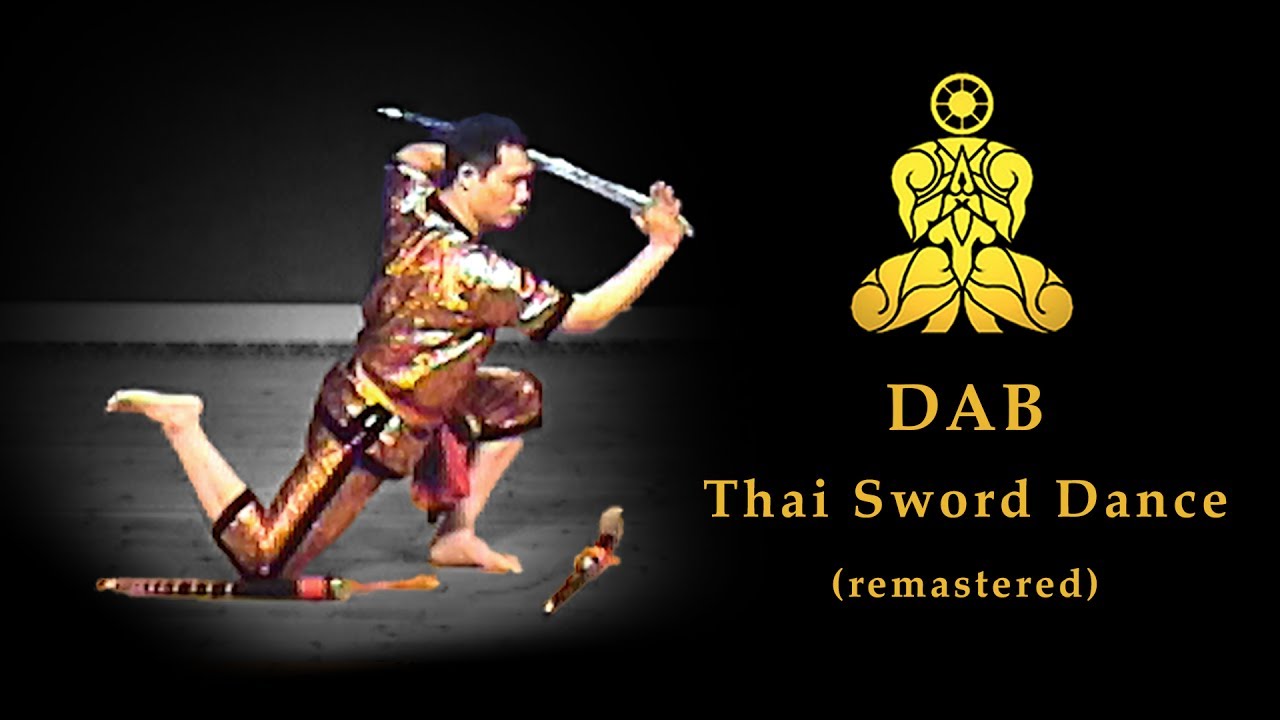 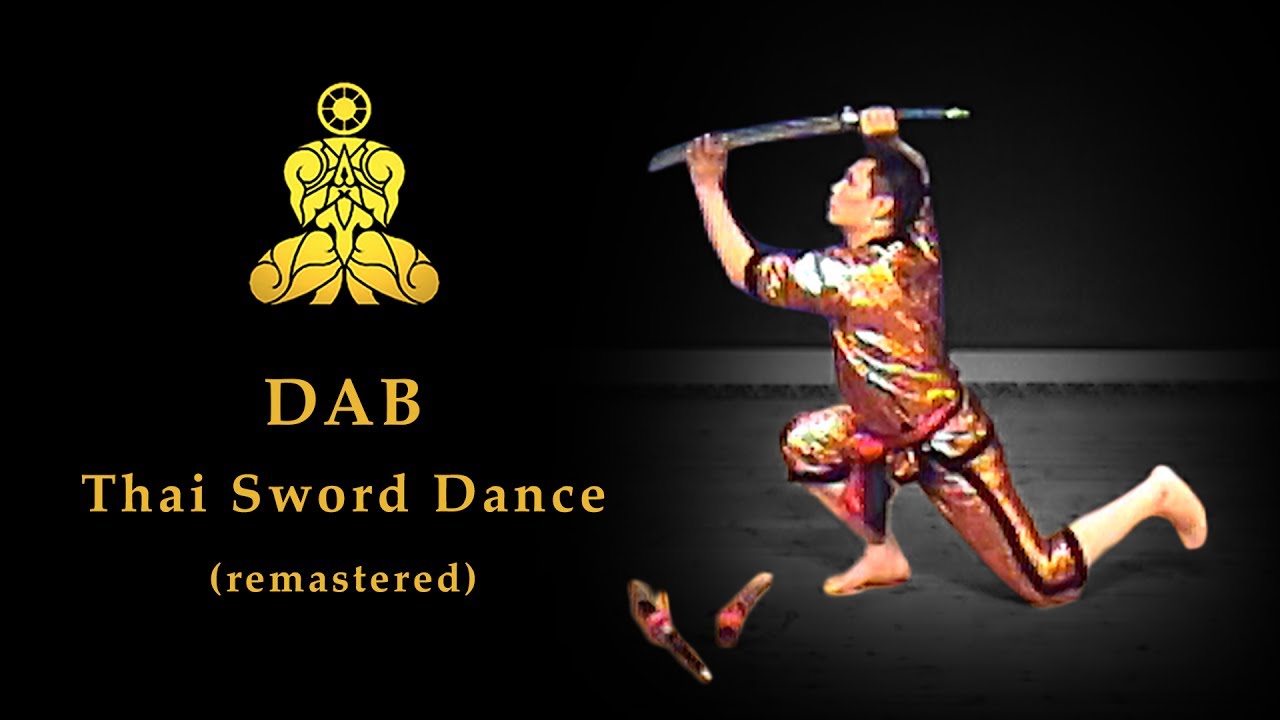 The Curse of King Naresuan

Members of the DAAB NARESUAN cultivate a special form of the traditional sword dance. Whenever they visit the statue of the king in Ayutthaya, they express their respect and appreciation for King Naresuan with a special sword dance (Ram Daab).

Legend has it that a sword dance performed by a person unworthy or incapable of representing the true legacy of King Naresuan’s followers would be tantamount to an insult to majesty. It is therefore said that those people would fall victim to a curse and die within 48 hours after the performance of such a dance.

We have dedicated a blog post to the curse of King Naresuan. 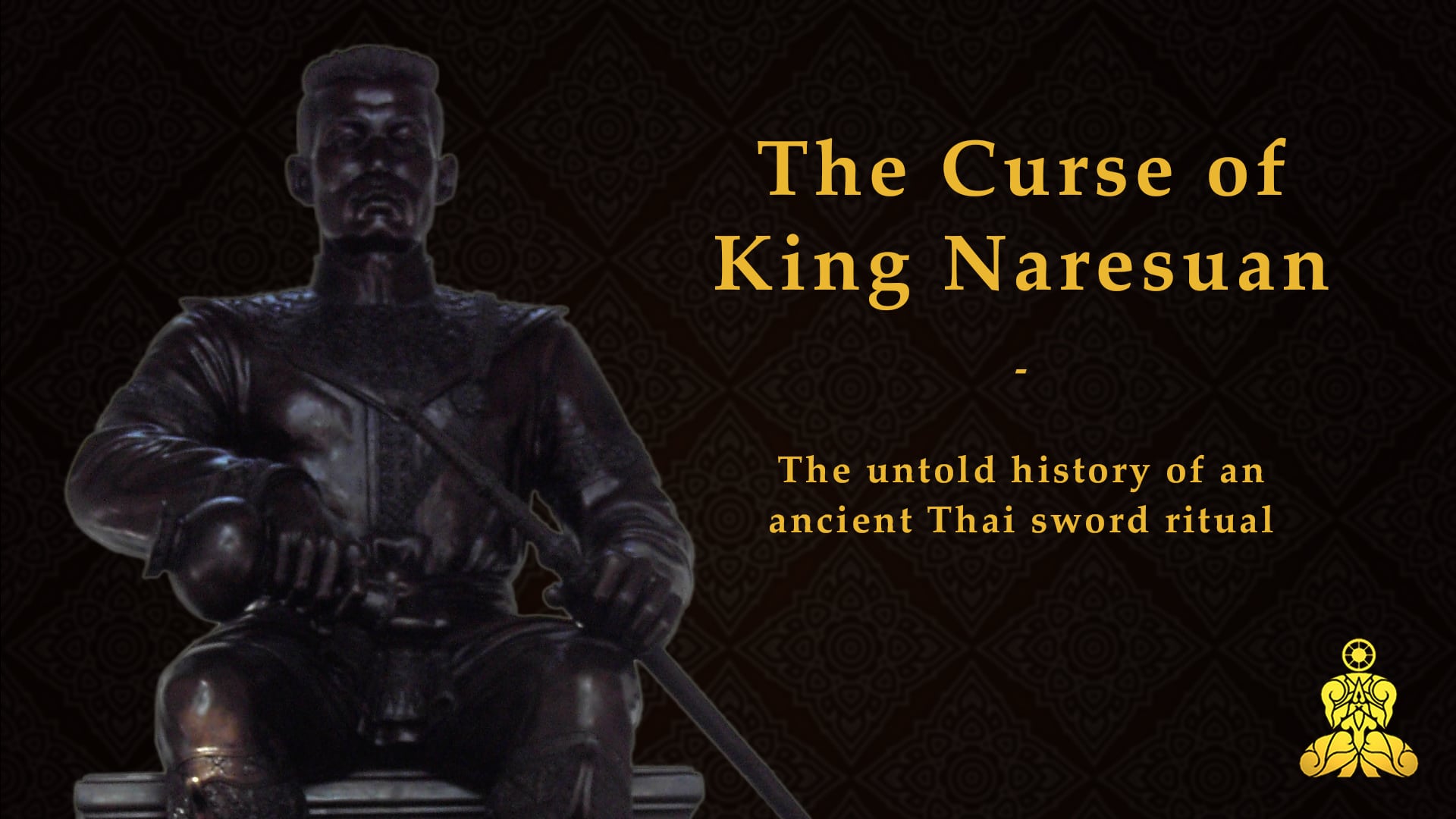 How to make training swords for DAAB

If possible, members of Pahuyuth weapon fighting disciplines (knife, shield, sword, staff, scarf) always produce their training weapons themselves. Learning a weapon fighting style naturally requires the integration of foreign objects into the movement patterns of the own body.

The production of training weapons is a first step towards establishing a personal relationship with your own weapon and the respective weapon type. All training weapons, with the exception of scarves, are always produced in pairs. 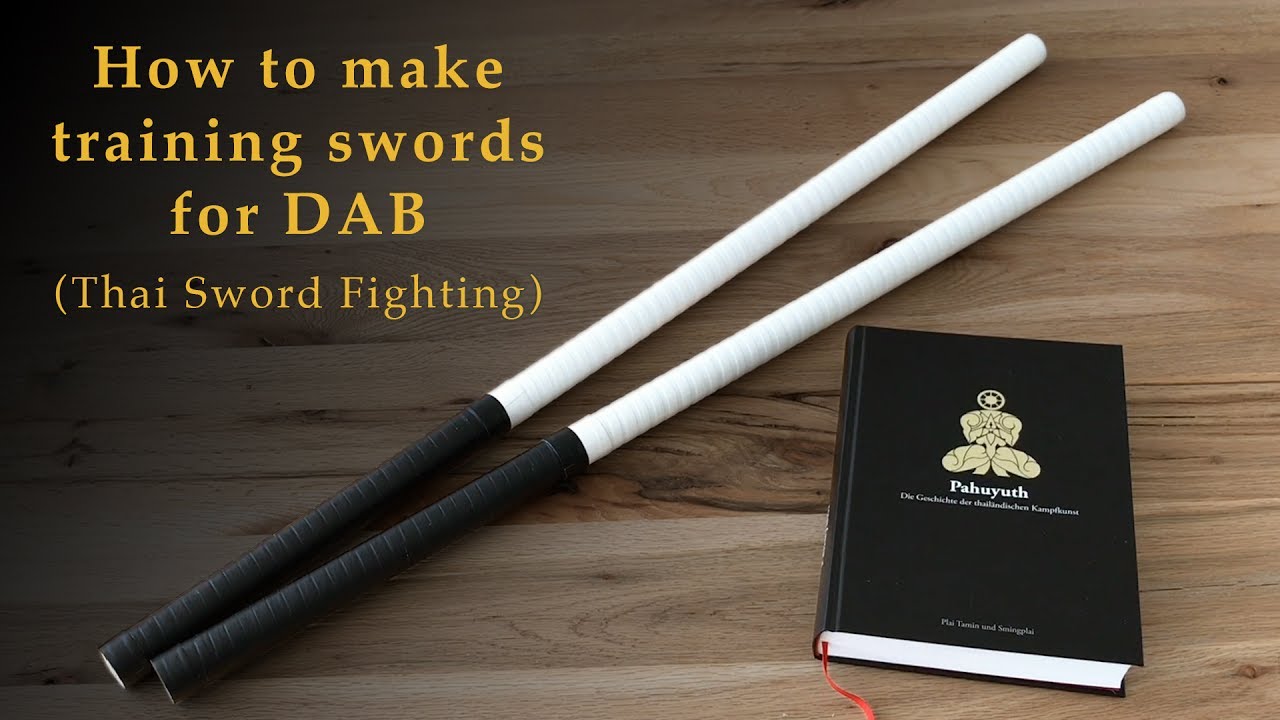 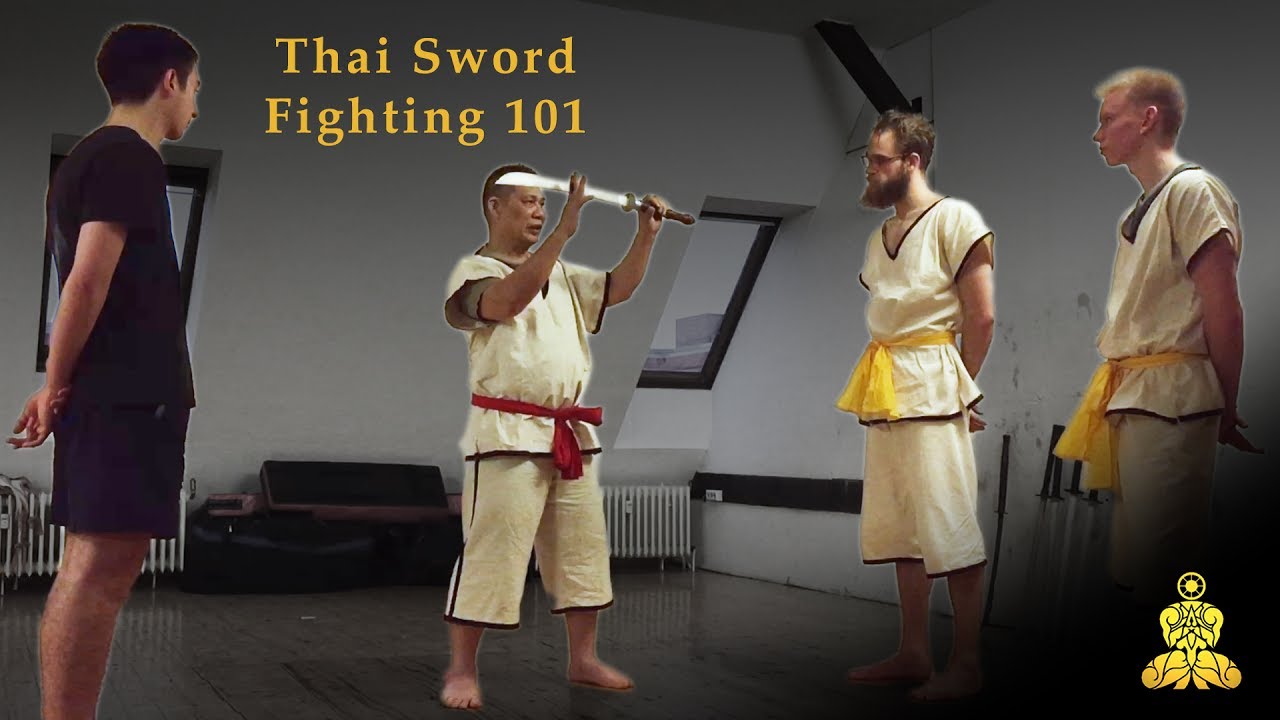 In this video a teacher explains what a Thai sword is, where it comes from, how to grip it properly and how to use it. 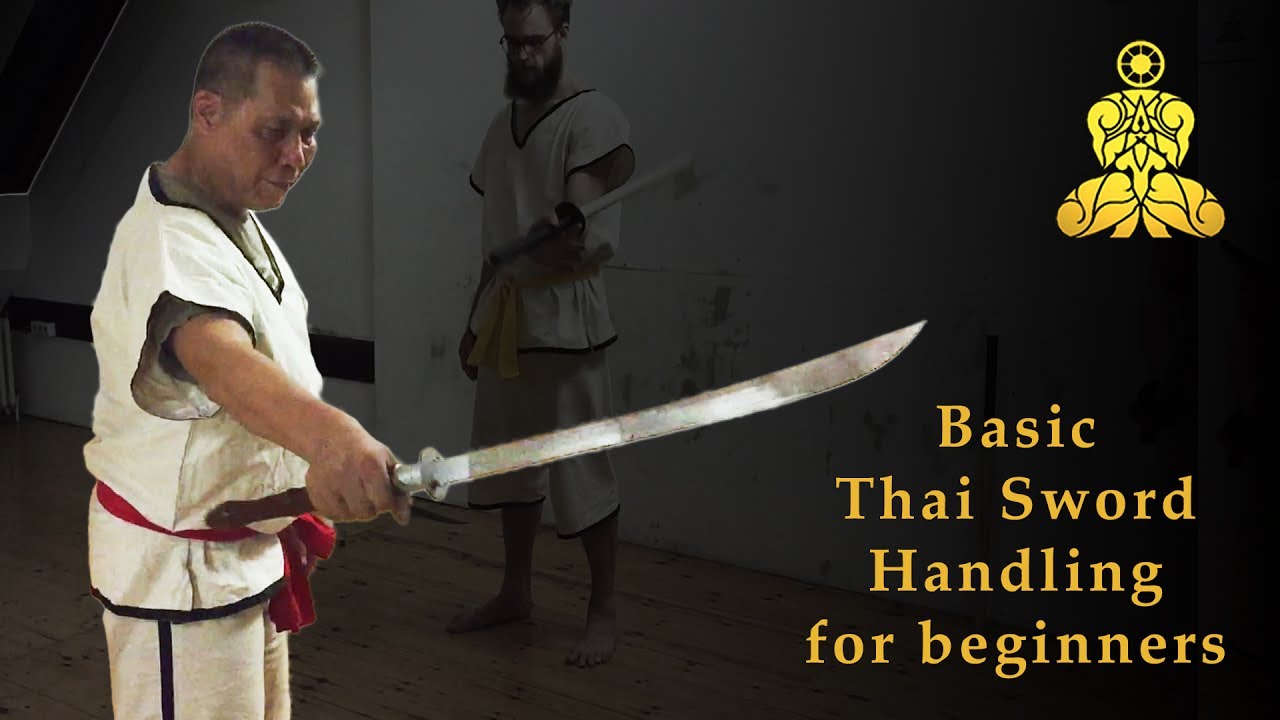 In this video a teacher shows basic handling techniques for beginners. 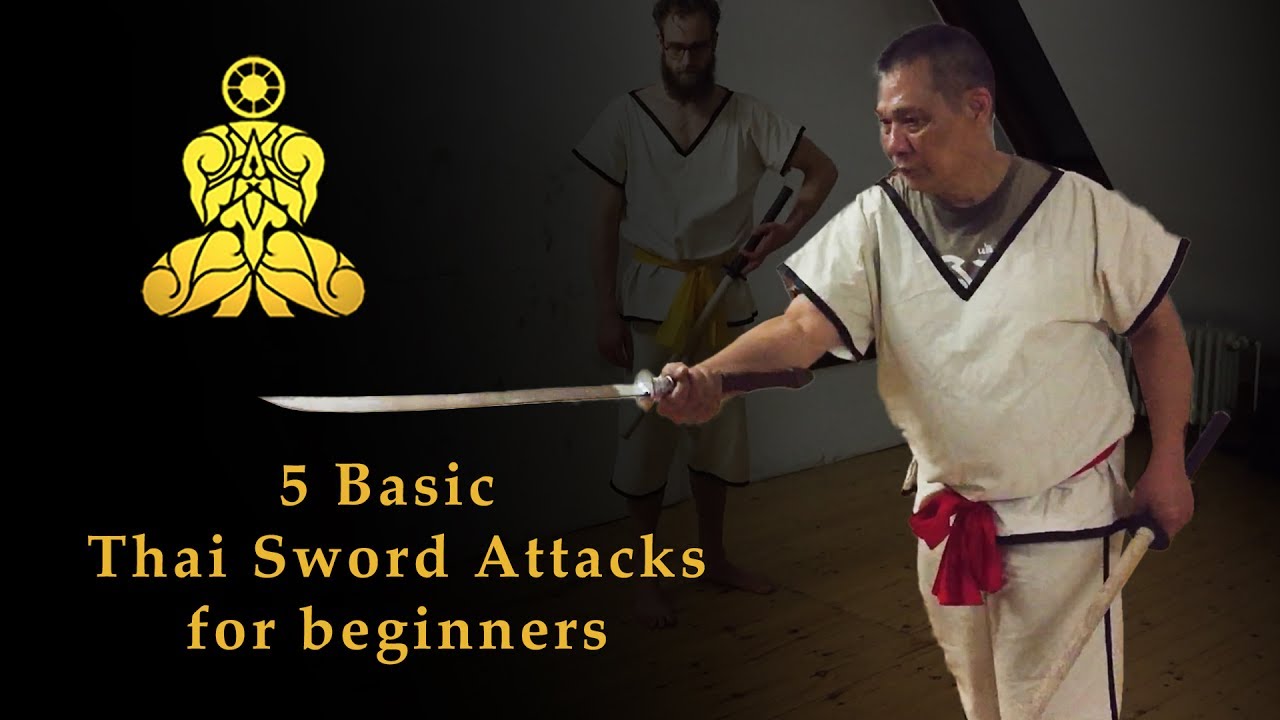 In this video a teacher shows five attack techniques with the sword for beginners. 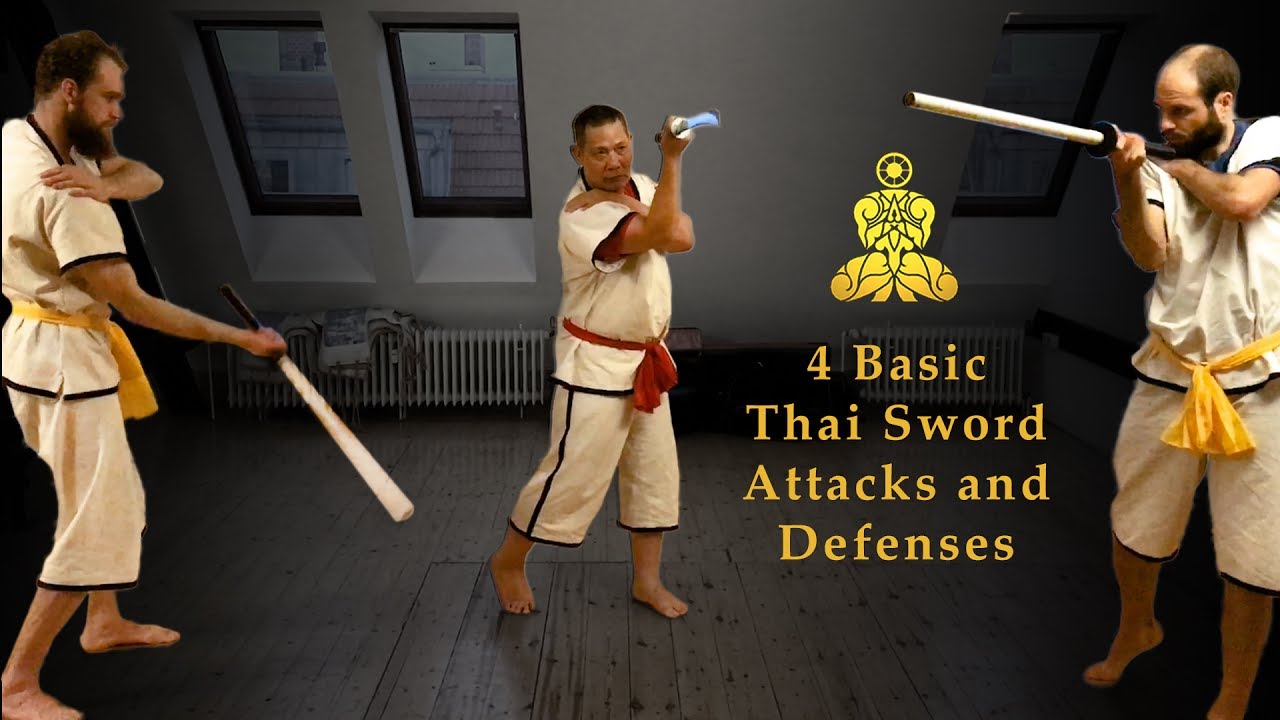 In this video a teacher shows four basic attack and defense techniques with the sword for beginners. 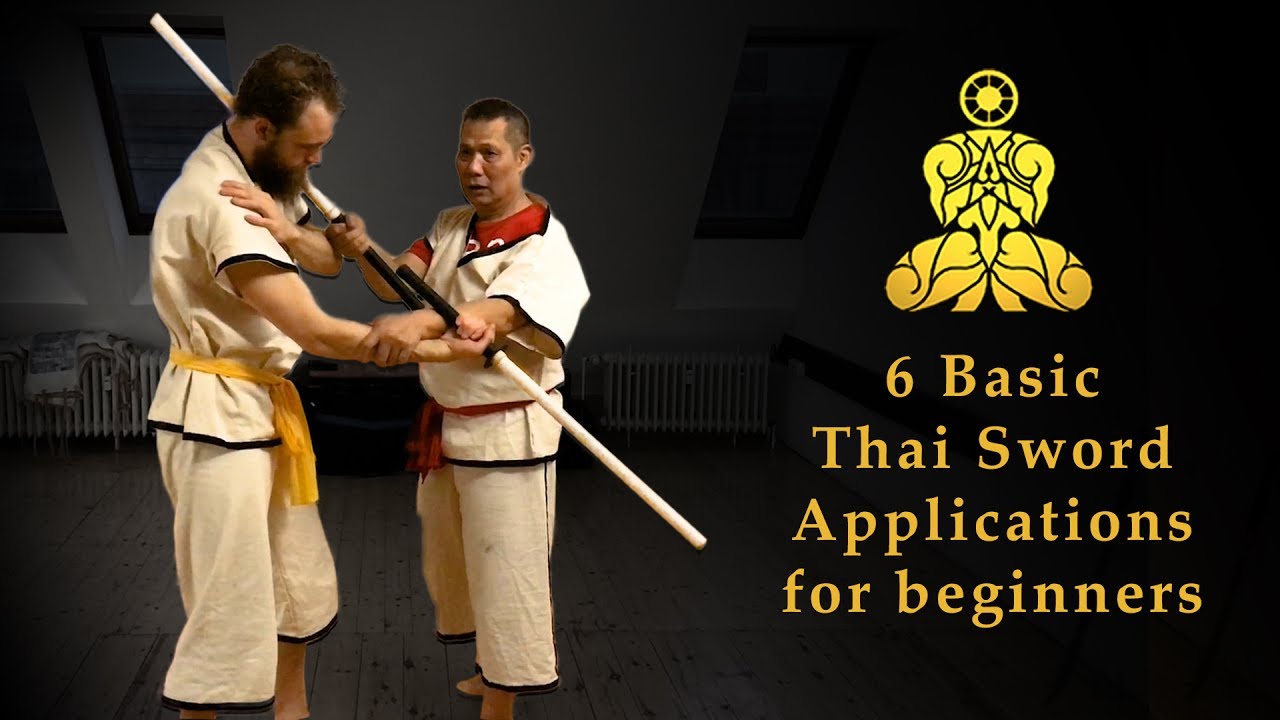 In this video a teacher shows six applications for Thai swords for beginners.

DAAB – How to use a Thai sword scabbard

In these two videos a teacher shows how to use a Thai sword scabbard. The sword hull is used for safe transport. It usually consists of hardwood and can be used for defense and attack due to its high stability.

An old saying says that a drawn Thai sword is “thirsty”, especially if it is a sword with magic engravings. For this reason in many cases it was decided not to draw the sword at all. They were only completely drawn if it was really not avoidable. 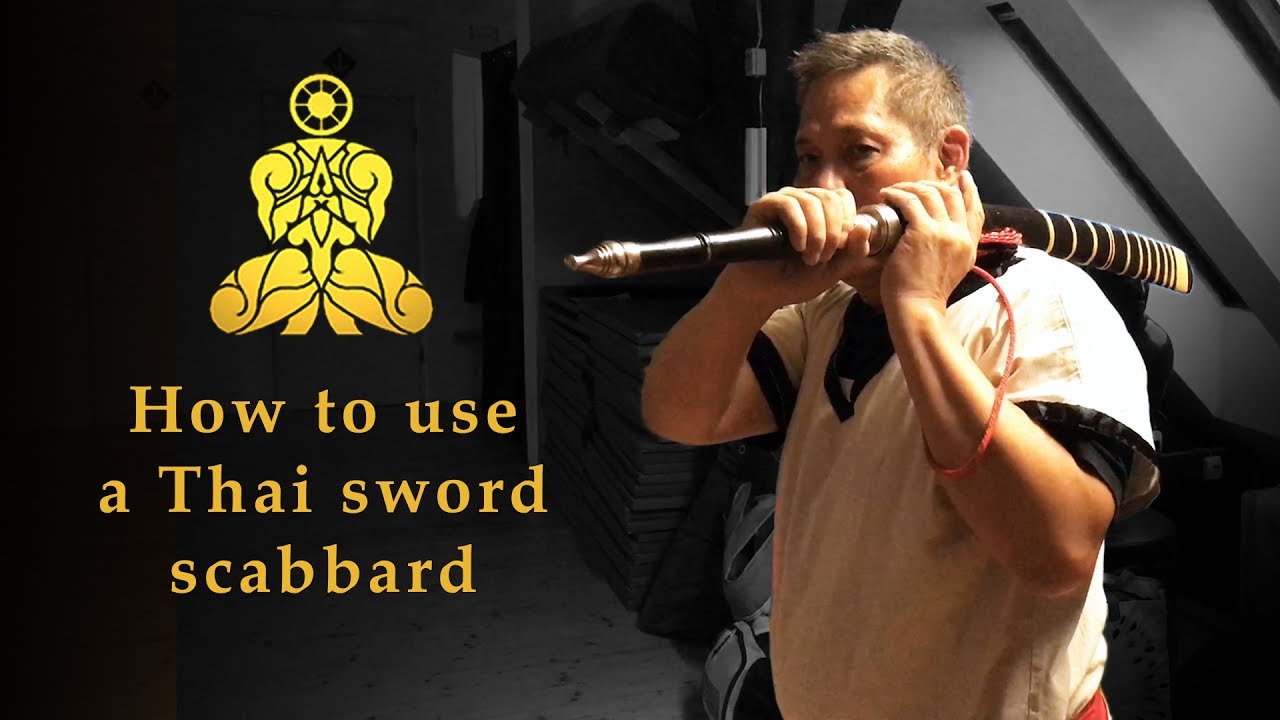 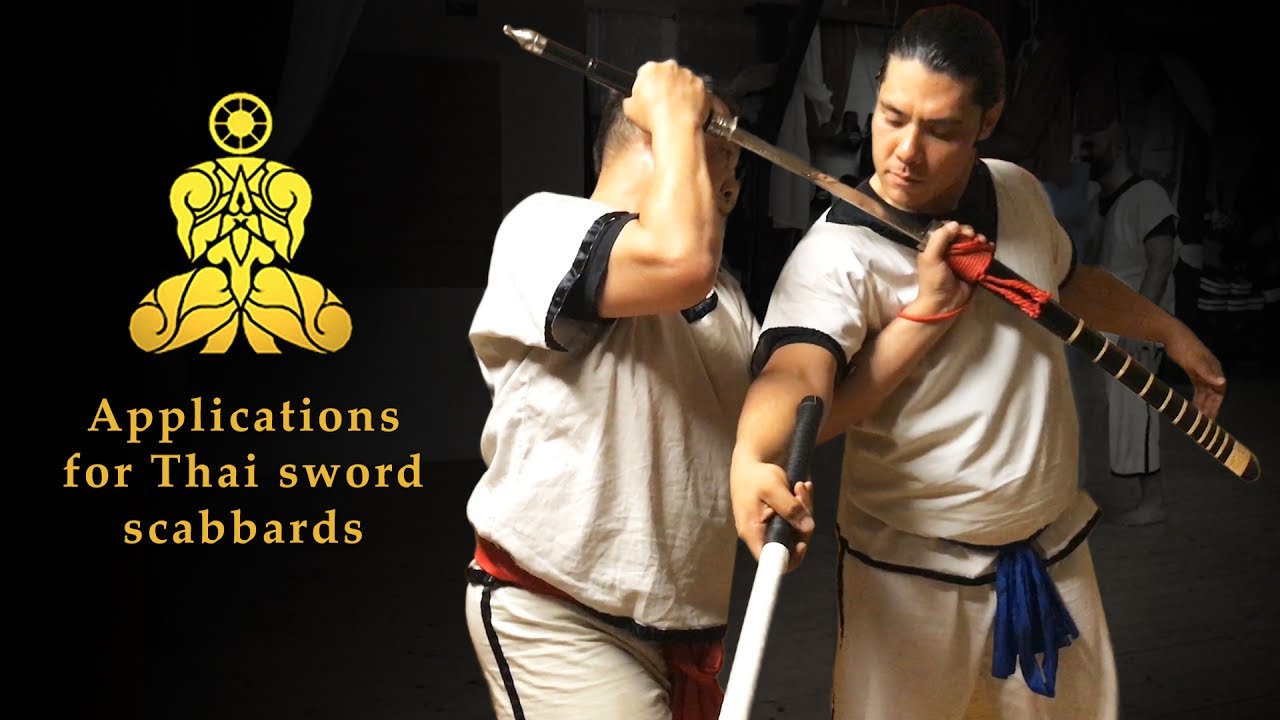 In these three videos a teacher explains why DAAB practitioners prefer to fight with only one sword instead of double-sword (Daab Song Mue), why control and precision are more important than strength and where the differences between DAAB (war sword) and Krabi Krabong (show and sport fighting) lie. 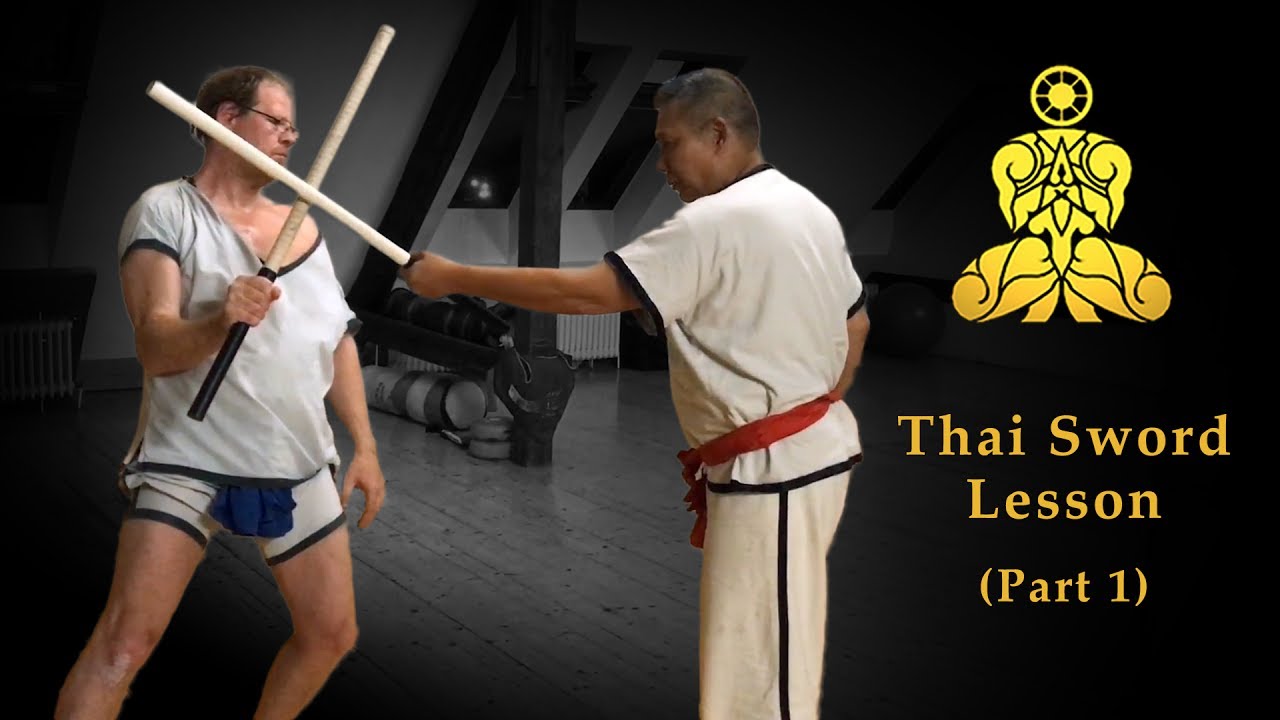 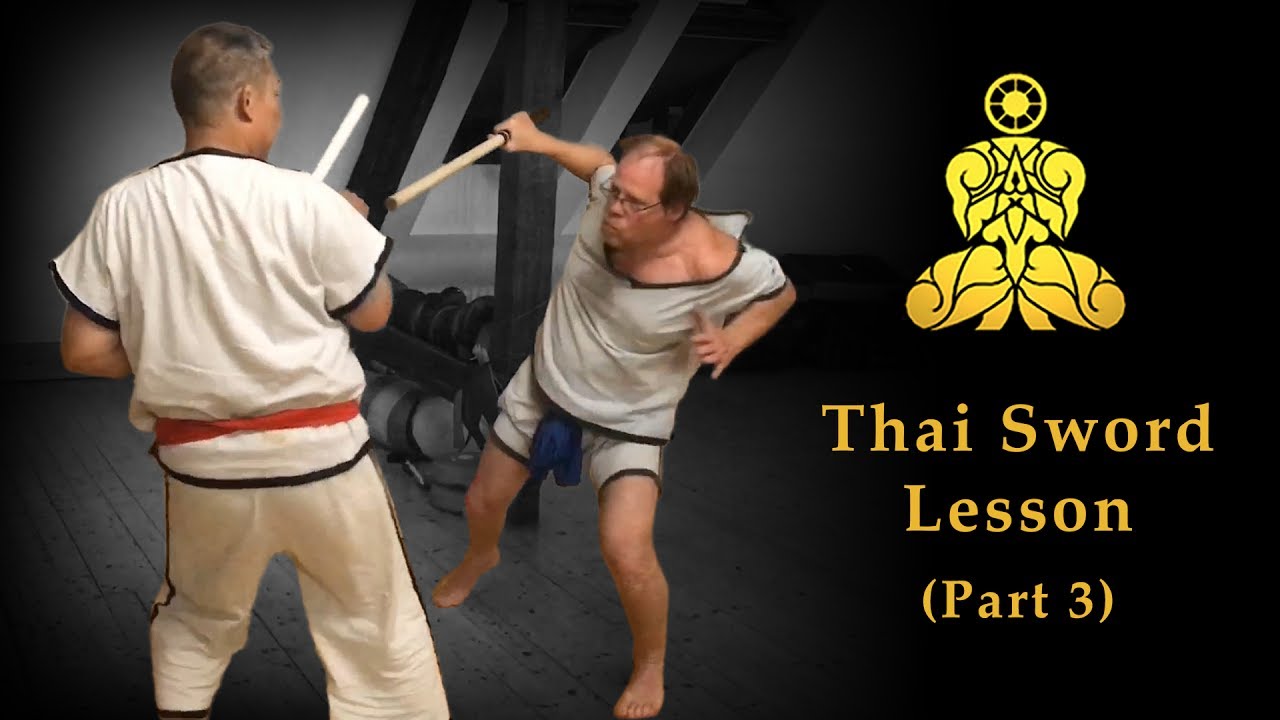 For beginners and those interested, we offer free content to try out for yourself as well as the opportunity to participate in our training in Berlin several times a week.

On our online topic page you will find free digital learning offers and information about our new online membership program. 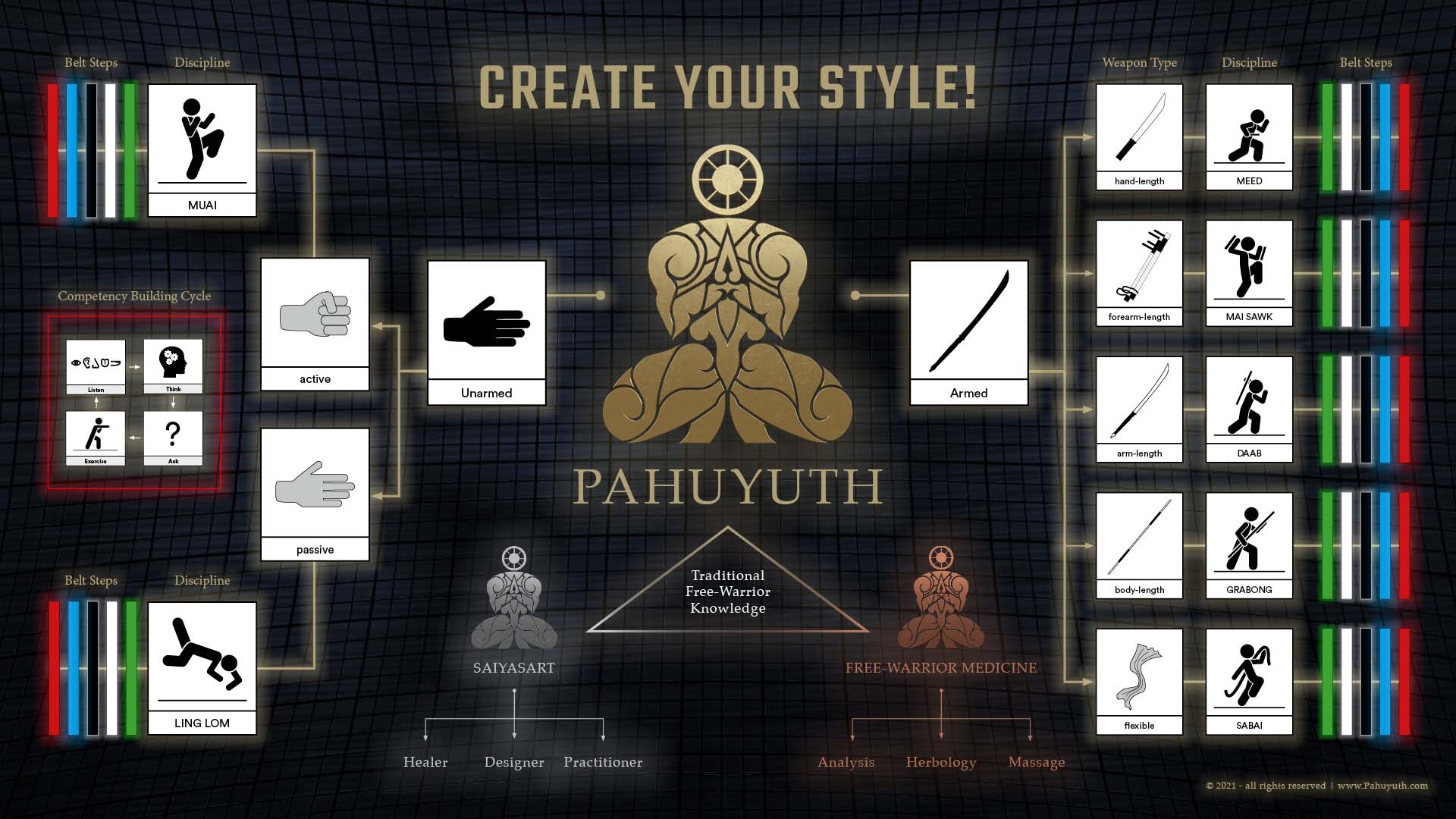