Self-Defense at the Pahuyuth School Berlin

While Pahuyuth was designed for survival in lawless spaces, today we enjoy the benefits of a rule of law in which powers to protect citizens are regulated and limited by law:

The protection of the individual is the responsibility of the state.

As mediators of a traditional martial art and guardians of traditional traditions, culture and customs, we see ourselves in the responsibility to help our students to a healthy and righteous approach to their fighting knowledge.

Therefore, we do not see self-defense within the framework of the law as an independent Pahuyuth discipline, but as a multidisciplinary competence and valuable basic attitude, which we convey to all our students. Here we give particular importance to strict legal conformity and interpretation, which we consider to be an indispensable basis for a truly realistic self-defense.

(1) Whoever commits an act required by self-defense does not act unlawfully.

(2) Self-defense is the defense required to avert a current unlawful attack from oneself or another.

Excerpt from the Criminal Code of the Federal Republic of Germany – when it comes to the topic of “self-defense”, current laws have the highest priority at the Pahuyuth School in Berlin.

What we mean by “realistic self-defense”:

The terms “realistic self-defense” or “effective self-defense” are often used to promote self-defense courses and seminars, which teach techniques aimed at harming the alleged attacker as severely as possible through massive counterattacks.

The reality however, is that such behaviour is almost always illegal and all too often ends in (legitimate) counterclaims, investigations and criminal proceedings against the original victim – this reality is often concealed in favour of marketing, but can have very far-reaching and extremely real consequences for inexperienced users.

It is relatively easy for an experienced martial artists to respond appropriately to attacks of all kinds and to send one or more enemies into their demise – but fighting is not self-defense! That is why we have established three basic rules for a truly realistic and sustainable self-defense.

Warrior in the Law – Three rules for a successful self-defense:

Remember: vigilante justice is not self-defense, but a criminal offence!

(to be examined in case of illegality)

an attack is any violation of legally protected individual goods or interests by a human act.

An attack is present when it is imminent, is taking place or is still ongoing. (No permanent danger!!)

The attack is unlawful if the attacker is not justified or the victim is not obliged to tolerate it.

A defensive action is required which, in the most gentle way with the mildest means available, can effectively and definitively fend off the attack, whereby the attacked person does not have to engage in the risk of insufficient defensive action.

It is sufficient that the act of defense at least complicates the attack in its concrete form.

Among several equally effective options, the one that causes the least damage must be chosen.

a) Exceptionally, the right of self-defense is subject to restrictions.

This is the case if:

Then the “three-stage model” applies:

b) Exceptionally, the right of self-defense is not given.

This is the case with:

An intentional provocation is committed by a person who, in the sense of the dolus directus 1st degree, challenges an attack by illegal conduct in order to be able to injure the opponent under the guise of the externally given objective emergency situation. (A textbook case from criminal law is the self-defense provocation case)

Will to defend
The perpetrator must counter the attack with the will to defend himself, i.e. have the intention to fend off or at least mitigate the attack in the sense of a purposeful intention.

In the summer of 2017, an impromptu crash course on “Self-defense within the framework of the law” took place at the Pahuyuth School Berlin. 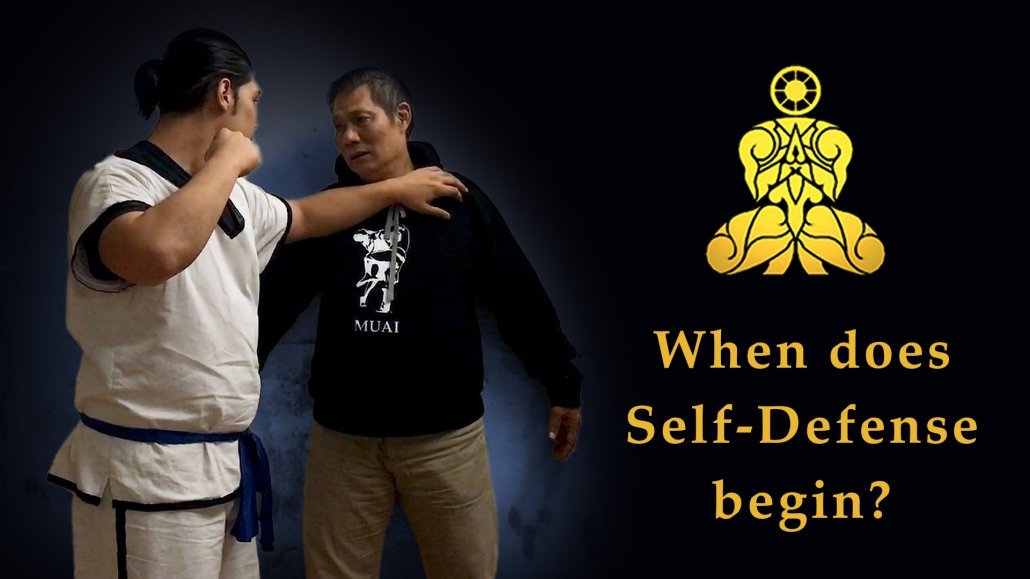 For beginners we offertwice a week the opportunity
to take part in our trial student course at the Kampfkunstschule Neukölln in Berlin.
You can find all information on our trial training page.