The 30 Exercises are a training program for beginners, which consists of thirty body weight exercises.

In Pahuyuth, an action technique is a technique that combines climbing up on an opponent with a fighting technique. Here, it does not matter, if an armed or unarmed technique is used. 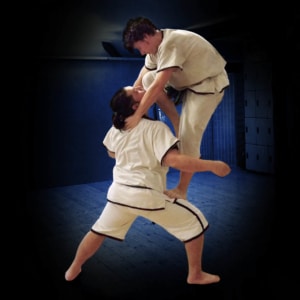 In Pahuyuth, an alibi technique (also called placebo technique) is colloquially referred to as a technique that is carried out for its own sake or as an excuse, apology or justification.

Typical of alibi techniques is that while they create a visible action that is intended to feign engagement and training zeal, they are not technically capable of hitting anything or having a significant effect if they hit. An alibi technique is thus distinguished from a feint mainly by its lack of endangerment potential and the underlying intention of the performer.

Pahuyuth students are advised to avoid alibi techniques in principle or to immediately replace them with more effective techniques. If this does not happen, serious errors in the autodynamic programming can occur (see model of autodynamics) which can lead to undesirable results in an emergency.

The Altai or Altai Mountains is an up to 4506 m high Central Asian high mountain range at the border area of Kazakhstan, Russia (Siberia), Mongolia and China. The foothills of the Altai Mountains in southwestern Mongolia were home to the early Tai (Thai) about 4,500 years ago, including the Gleeh tribes.

The application level, black belt level, is the third of three student belt steps (see learning level) of the Pahuyuth. Members of the application stage wear a black belt.

The application level (black belt) is the last of the three Pahuyuth student stages. It is also referred to as a level of self-control or autodynamic stage (see model of autodynamics). The teaching content is mainly concerned with the development of the body’s own autodynamic functions and the confrontation with one’s own existence as a warrior.

The technical qualification and the Carrior’s Worthiness in the black belt level are usually created by self-critical practice and experimental teaching activities. Here, one’s own fighting style is formed to completion by specializing in techniques, perfecting tactics, and unlocking combat shaping skills.

Further information on the teaching content of the application level can be found in the Pahuyuth Compendium:

The spproproiation, intermediate or white belt level is the second of a total of three student belt steps (see learning level) of the Pahuyuth. Members of the appropriation level wear a white belt.

The teaching contents of the appropriation level (white belt) mainly refer to integrating the basic level techniques (green belt) into one’s own combat methodology and to further develop them.

This development process is divided into five learning contents. They are considered to be the guiding criteria for the qualification exam for the black belt.

The Carrior’s Worthiness for the black belt results from the formation of self-responsibility or personal responsibility.

Further information on the teaching content of the appropriation level can be found in the Pahuyuth Compendium:

Ascending Trajectory (Tauw Süy) or “rising” in the Pahuyuth is a technical execution in which the target is hit in an upward movement. It does not matter whether it is a strike or a thrust.

Only the bodily weapons foot, elbow and knee are classified as ascending. 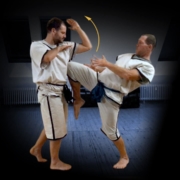 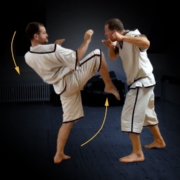 Fist techniques are again divided into straight, curved, and mixed.

AWUD (also Duey Awud) is the umbrella term for armed Pahuyuth. The weapon disciplines of the Pahuyuth (AWUD) are based on the physical characteristics of the respective non-bodily weapons. 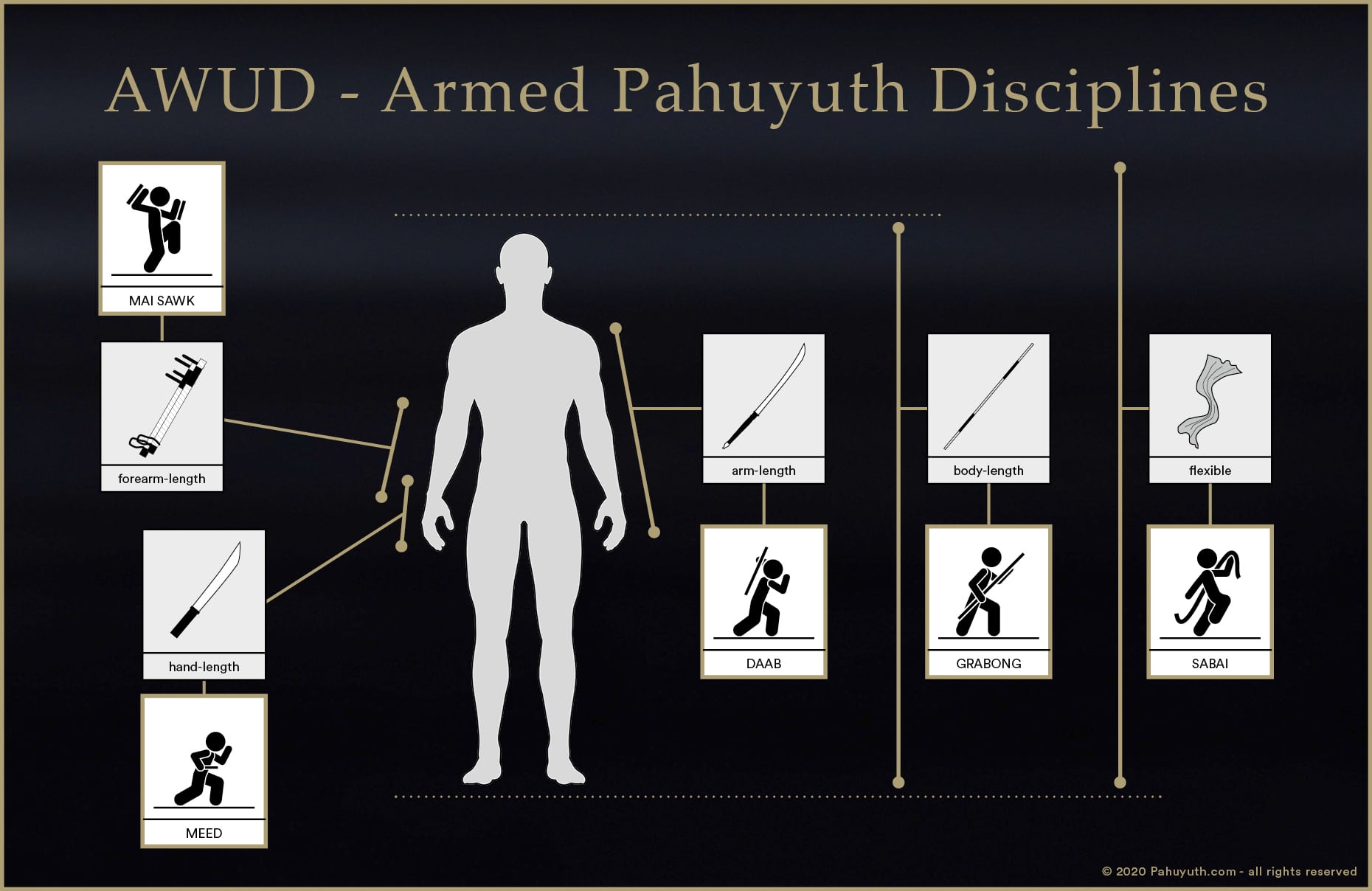 Analogous to the traditional combat methodology of the Gleeh-Warriors, this assignment is explicitly not about the use of a particular weapon, but above all about the nature and functioning of an object. The respective fighting style always allows to be executed with improvised weapons. In order to qualify as an AWUD-Warrior, knowledge of all Pahuyuth weapons disciplines is required.

The weaponless disciplines of the Pahuyuth (MUAI or LING LOM) are summarized under the term LING LOM (umbrella term).

A balance point or center of gravity is the place where you can balance a sword by placing it like a seesaw (a two-sided lever). With the Thai sword (Daab), the balance point is relatively close to the pivot point. As a result, Thai swords are not top-heavy but balanced. They are held close to the balance point of the sword. This allows a high rotation speed and enables complex movement patterns by changing direction. The thumb, the base of the index finger and the forefinger act as the axis of rotation, while the opening and closing of the hand creates the rotary swing. Sword strokes can thus be produced not only from the arm or body rotation, but also from the hand or wrist.

Basic technique or “mother technique” (Mae Mai or Maeh Mai) is a technique used to shape reaction patterns for the use of primary combat elements (Physical Knowledge), Defense Knowledge and Safety Knowledge.

Probationary students (yellow belt) learn 45 basic techniques. A poster with these techniques can be purchased in our shop. 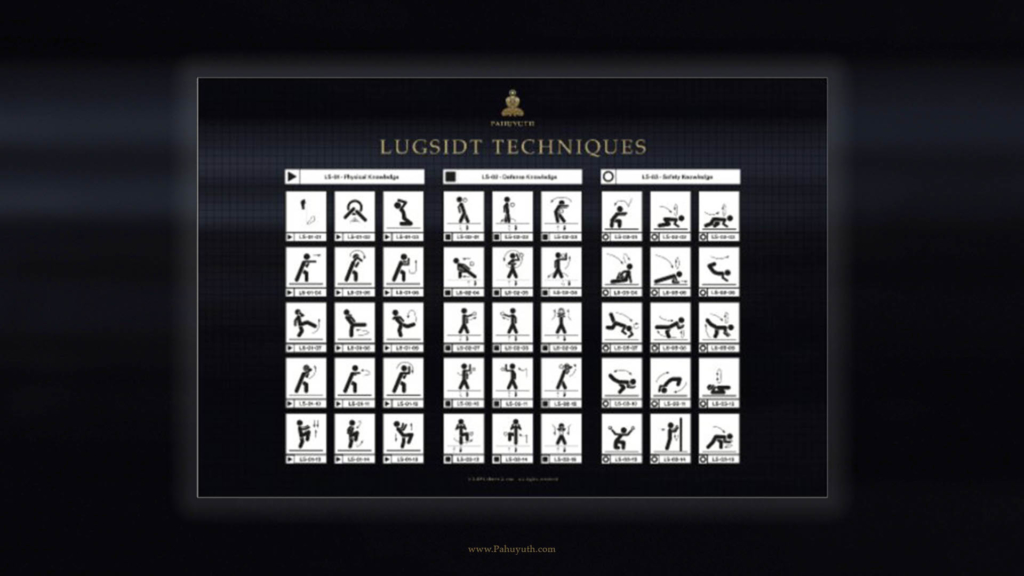 The basic techniques and technical variants for all seven Pahuyuth diziplines are listed in the Pahuyuth Compendium.

Use of the term “Mae Mai” in other fighting styles

In contrast to the original understanding of pahuyuth about the conceptual structure and the teaching of combat techniques, often arbitrarily selected combinations of techniques (Mai Gon) are classified as basic techniques (Mae Mai) in Muay Thai or Muay Boran. The lack of a logical derivation and justification for this classification can be seen as an indication of a lack of expertise in the reconstruction of traditional fighting styles.