A yellow belt is a belt in the Pahuyuth. Yellow belts are worn by probationary stage students. 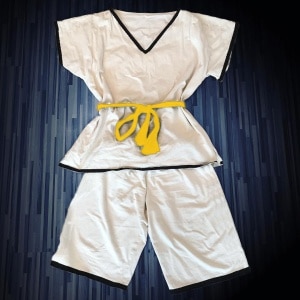 Origin of the yellow color

In former times, Pahuyuth students had to apply to a teacher, for example by working as temple novices (Dek Wat, church child). Initially, each of these students was only taken in as probationary student to first examine their character and ideas.

The ancient teachers gave them an insight into the fighting knowledge (e.g. through fitness exercises), but no actual fighting techniques to prevent possible abuse.

It was only at a later stage that the teacher decided whether and to what extent it was possible for him to impart the necessary knowledge to the novice and to accept him as a full-fledged student.