Buddhism is one of the great world religions.

Buddhism describes itself as a doctrine of wisdom. Like Brahmanism, it originated in India and was founded by Siddhartha, later also known as the Buddha. Buddha means the enlightened, or is meant by it a timeless rediscovery of wisdom. Wisdom refers to personal complacency through disciplined self-discovery for the present life. The fundamental lines of faith are formed by the renunciation of violence, reincarnation and karma.

The path of Buddhism is the path of complacency, which is sought through self-contemplation and the renunciation of appearances. The wisdom is defined by interpreting the classification of good and evil as well as heaven and hell.

The dissemination of wisdom, which is called Buddhist doctrine, takes the form of a public proclamation, or a public lecture by the monk. The Buddhist monk is convinced of the truth he proclaims in the sense of the Buddha. According to the words of buddha, a monk was able to join the Buddhist society by professing himself to Buddhism through a bald cut for the symbolic renunciation of social wealth, and by wearing a simple yellow robe. As a monk and Buddhist teacher, he continued to proclaim the Buddha’s teachings among others. Apart from these tasks, he has no other professional activity that ensures his livelihood. He receives his food and all other things to live with through donations.

It was only after a wealthy merchant had built a temple and donated it to the monks that they settled and Buddhism began to change into a temple culture. During this time, in addition to the proclamation of Buddhism, a prayer ritual was also introduced. The prayer texts were created with the help of the prayer texts from Brahmanism. The positions of the prayer text that named the deities of Brahmanism were changed to Buddha and expanded by the interpretation of Buddhist doctrine.

A typical Buddhist prayer text is similar to that of Brahmanism, but consists of only two forms.

Since then, Buddhism has emerged as the proclamation of a doctrine of truth as a temple culture with prayer rituals along the lines of Brahmanism. This means at the same time that with this new formation also the hierarchy structure of Buddhism was created. Other groups of Buddhism, on the other hand, have been changed by mixing with different styles and the belief prevailing there. All in all, Buddhism, like all other faiths, did so, with the foundations of the Buddha’s teachings, in the course of time, a change and deviation through the influence of inside and outside.

The first point of contact of Buddhism with the Saiyasart can already be found in the early days of Thailand through the harmony between wisdom and knowledge of truth, whereby there was a tacit acceptance of the Saiyasart original text. These are the three topics of life cycle, reincarnation and karma. The original text of the Saiyasart was reinterpreted according to Buddhist understanding. This interpretation can be found in later times in the writing collection of the Tibetan consecration of the dead, respectively the book of the dead. The content refers to the karma of being as a human being, in which earthly death does not mean a final end, but rather a section of reincarnation in order to be destined for rebirth with the knowledge gained.

On the other hand, it is also the origin of DAO Buddhism , which subsequently evolved in the direction of today’s China. The term DAO means way, or the way of Buddhism. The Thais of that time did not regard Buddhism as a religion or a faith, but understood it as an interpretation of the Saiyasart text. Therefore, the mention of Buddhism was not in the foreground.

During the immigration of present-day Thailand, the Thais found a Buddhism based on the style of Brahmanism. Thus a new fusion arose between Buddhism and the Saiyasart on the one hand, and Buddhism and Brahmanism on the other.

Apart from the fact that Brahminism and even older religious cultures already existed, Buddhism still existed as an insignificant faith in its early days. It was only after Buddhism was used as a means of diplomacy that thais began to develop it as one of their religions.

Buddhism introduced the worship ritual using incense sticks and a pair of candles originally from the Saiyasart According to Saiyasart the incense sticks were a symbol of the transformation between the organic and the inorganic state of the being. The pair of candles, originally white, stood for finding the truth in relation to separate equality. Buddhism has redesigned this ritual by setting the number of incense sticks at least three. Here it was considered a incense chopstick Buddha, one to the Buddhist teachers and one to the monks. The pair of candles was used in Buddhist color ( yellow ) and stood as a symbol of enlightenment.

Traditionally, the Saiyasart rituals were performed without worship and chants. In Buddhism there were texts of worship, but no ceremonies and rituals were performed outside their temples. In the merging of the two directions, rituals and ceremonies according to the custom of the Saiyasart were therefore combined with the adoration texts of the Buddhist monks. In the course of the development, Buddhism took over the entire ceremonies and rituals in the form of public tasks, thus pushing the Saiyasart further into the background.

In the course of time, the knowledge and wisdom regarding the supernatural phenomena have also reached the Buddhists. As a result, the Buddhists became more and more concerned with the inorganic beings and the various magical powers. The funeral ritual of the faithful was also introduced among the Buddhists. A special feature was the creation of magical objects, which was mistakenly associated with Buddhism. The magical badges and sayings that originally came from the Saiyasart were also modified or omitted from the Buddhist pattern. Only those who, due to their magic, could neither be changed nor omitted, were retained in their original form. Amulets and pendants with different stored magical powers, as patrons or lucky charms, are an example of this. This type of Buddhism exists only in the region where the fusion between Buddhism and the Saiyasart took place. In other descriptions of this style it is known as Thai Buddhism.

Throughout the development of Buddhism, the original form of Indian Buddhism, Lankan Buddhism and Tibetan Budddhism were introduced via Burma into Thailand. In part, Thai kings also requested the translation of the Buddhist wisdom doctrine (Pra Tamm) in the form of the original version. Thai Buddhism today can be distinguished into two groups. First, Nigay-Buddhism (Nigay), which is shaped by the Saiyasart and secondly, Tammayuth-Buddhism (Tammayuth), which is influenced by Bramanism or Lankan Buddhism.

The content of the Buddhist prayer texts was changed, or revised, in various places, and existed under the name Pra Treipidock (three areas of knowledge).

The magical areas of the Saiyasart were kept under wraps. On the one hand, because the Saiyasart was to be integrated into Buddhism as a special branch, and on the other hand to control the magical abilities under Buddhist rule.

According to the official statement, Buddhism is opposed to the Saiyasart as a vile knowledge (Derachan Vicha). Only the part of the Saiyasart that is also integrated into Buddhism is considered Buddhist magic, which has been said to be established for good causes.

The magic of Buddhism is practiced in three forms:

Buddhism is considered to be the main religion for Thais and has the highest number of followers.

A coffee for a teacher 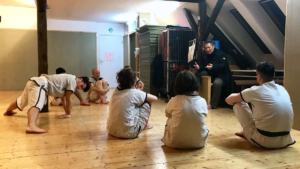 It is our goal to preserve the knowledge and culture of the ancient Pahuyuth Free-Warriors for future generations.

For all those who would like to support us in our efforts to protect and maintain the traditional knowledge by education and teaching, we have set up a Buy me a Coffee account.

We use the proceeds to make even more content of this kind available to the public.

Have a coffee for yourself 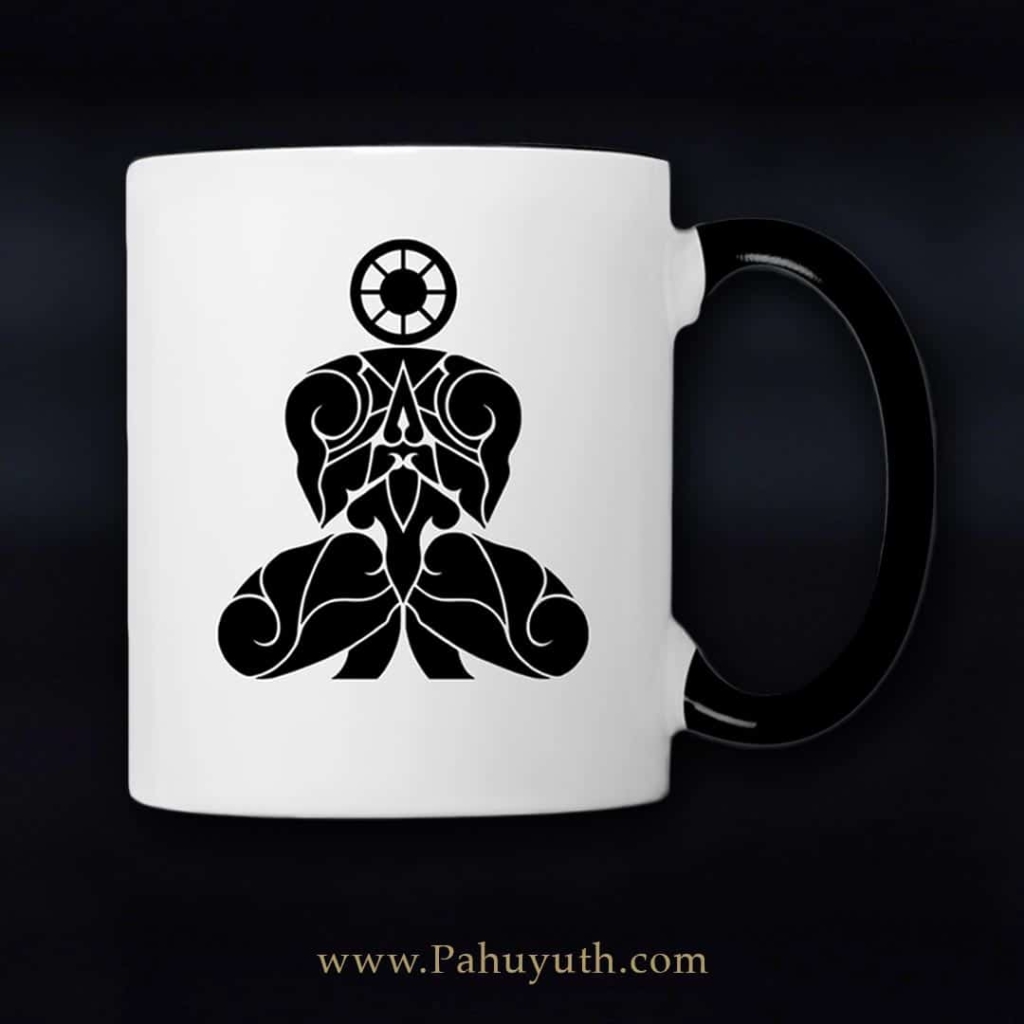 You’d rather have coffee yourself? No problem! In our shop you will find the matching mugs, t-shirts, hoodies and much more!